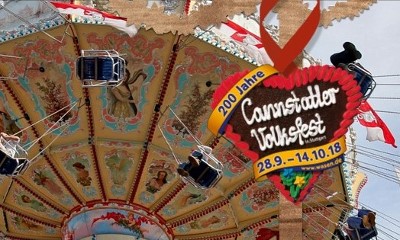 For almost 200 years, the Cannstatter Volksfest has enjoyed enormous popularity and annually attracts about four million visitors from near and far to Stuttgart, the state capital of Baden Württemberg. People are captivated by the special atmosphere of the wonderful funfair coupled with beautiful festival tents, a colorful flea market and many spectacular attractions. Rich in tradition, the Cannstatter Volksfest is not only the biggest festival in Baden Württemberg but it is also has one of the biggest funfairs in the whole of Europe.

The Cannstatter Volksfest is an annual three-week Volksfest (beer festival and traveling funfair) in Stuttgart, Germany. It is sometimes also referred to by foreign visitors as the Stuttgart Beer Festival, although it is actually more of an autumnal fair.

The festival takes place at the Cannstatter Wasen from late September to early October, spanning a period over three weekends, ending the second Sunday in October. The extensive Wasen area is in the Stuttgart city district of Bad Cannstatt, near the river Neckar. A smaller variant of the Stuttgart festival, the Stuttgart Spring Festival, is also held each year in Wasen.

Although the Volksfest is not strictly speaking a beer festival, it is considered by many to be the second largest beer celebration in the world after the Munich Oktoberfest. According to estimates about 4.2 million people visited the festival in 2006. The Volksfest begins one week later than the Oktoberfest. 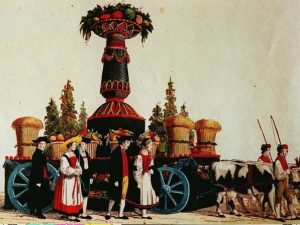 In a time of political strife and economic weakness, Württemberg’s King Wilhelm I and his wife Katharina laid the foundations for what today has become known as the Cannstatter Volksfest by forming the “Centralstelle des landwirtschaftlichen Vereins” – an agricultural organization – in 1817. An agricultural festival with horse races, prizes for outstanding achievements in livestock breeding combined with a people’s festival was, in accordance with the king’s wishes, designed to revive Württemberg’s economy after the damage done to it during the Napoleonic wars.

Everything was then prepared for 28 September, one day after the king’s birthday, in the following year. The original Cannstatter Wasen site has been the venue for the major festival ever since 1818. At the time it was an idyllic though watery meadow on the banks of the River Neckar which was yet to be dammed up. Lying between green fields and vineyards and without any surrounding buildings, the Wasen, as the site is called by the locals, lay within view of the royal Villa Bellevue close to the Wilhelma, the only combined zoo and botanical garden in Germany. It was therefore only a short horse-drawn carriage ride away for the festival’s benefactor who had no intention of missing the ceremonial opening and witnessing the successful start. The original idea of the “king amongst farmers and the farmer amongst kings”, as Wilhelm I was called by his contemporaries, continues today in the shape of the so-called “Landwirtschaftlichen Hauptfest”, a large agricultural show running parallel to the Volksfest that showcases all the latest technology within the farming industry in the state of Baden Württemberg. 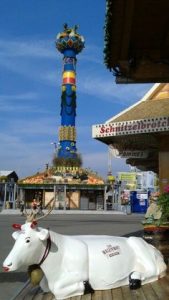 The “Fruchtsäule” (Fruit Column) is the emblem of the Cannstatter Volksfest. There has been a towering column decorated with many different kinds of fruit, cereals and vegetables ever since the first Volksfest in 1818. Today the symbol reminds one of the origins of the Volksfest, namely the agricultural festival. Commissioned and funded by King Wilhelm I, the frist fruit column was designed and built by the architect to the royal court, Nikolaus Friedrich von Thouret, the money for the first fruit column was funded by King Wilhelm I.

The “fruit column” is a wooden pillar decorated with fruit, it is 26 m high and weighing 3.5 tons. After World War I, with the beginning of the Weimar Republic, the fruit column was removed from the Cannstatter Wasen as it was considered a relic of the monarchy. Since 1935, the 100th anniversary, it has been back in its traditional place. Until recently the fruit column, the design of which has changed over the years, was dismantled after each Volksfest. Every few years it is redesigned. Since 1995 it has been left in place throughout the year and is thus also on display at the Stuttgart spring festival. In recent years only the tip has been dismantled leaving the lower portion in place housing information stands and the Cannstatter “city can”.

Today, there are seven large beer tents on the Cannstatter Wasen for people to celebrate in. They either have their own name or carry the name of the brewery supplying the beer.

Since 1982 the tents of Laub, Grandl and Klauss have been located by the fruit column. Each tent takes it in turn to host the opening ceremony. The price for a Maß is usually the same in all tents. 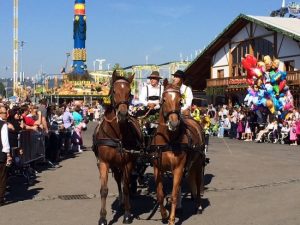 Traditionally a parade also takes place at the Wasen, usually on the first Sunday. In 1954 a record number of spectators attended the parade along the route from Stuttgart’s central square to the Wasen site: 300,000.The Mohrenköpfle is a pig in the parade. On the orders of King Wilhelm I, masked pigs (Maskenschweine?) were imported from Central China in 1820/21, in order to improve pig breeding in the kingdom of Baden-Württemberg. This crossbreeding with the “Chinese pigs” was particularly successful within the stocks of domestic pigs in the Hohenlohe region and the area around the town of Schwäbisch Hall.