Fasching is the Roman Catholic Shrovetide carnival as celebrated in German-speaking countries. There are many regional differences concerning the name, duration, and activities of the carnival. It is known as Fasching in Bavaria and Austria, Fosnat in Franconia, Fasnet in Swabia, Fastnacht in Mainz and its environs, and Karneval in Cologne and the Rhineland.

Fasching starts on the 11th day of November at exactly 11minutes after 11am and ends at the stroke of midnight on Shroud Tuesday – often referred to as Fat Tuesday (the Tuesday before Ash Wednesday). Fasching is more or less a Roman Catholic and Christian Orthodox celebration and most Protestant and non-Christian areas do not celebrate it.

Although the exact historical origins of Fasching are unclear, the observance of its rites is mentioned in Wolfram von Eschenbach’s Parzival (early 13th century). It was a festival that originated in the cities—most notably Mainz and Speyer—and was already established in Cologne by 1234. Traditionally, it was not only a feast before Lent but also a time during which the rules and order of daily life were subverted. This gave rise to such customs as handing over the keys of the city to a council of fools or ceremoniously letting women rule. It also inspired noisy costumed parades and masked balls; satirical and often impertinent plays, speeches, and newspaper columns; and generally excessive behaviour—all of which are still common elements of contemporary Fasching celebrations.

In Germany, particularly in the Rhineland area, the tradition can be traced to medieval times where many countries existed under harsh rules. Kings, princes and even smaller potentates maintained their own courts. In doing so, they flaunted before each other their own pomp and splendor at the expense of their population. 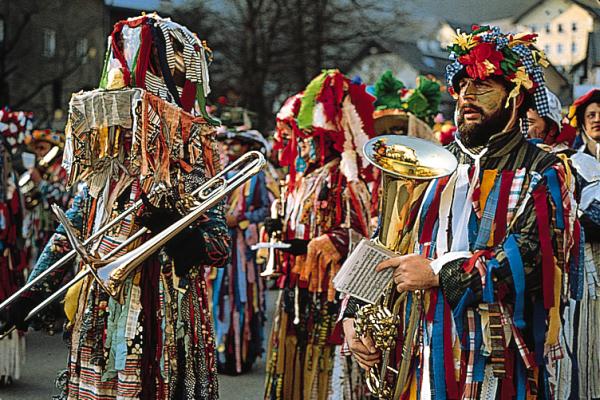 During Karneval time, the common people took a chance at ‘living it up” and “talking back to their rulers”. They would make a mock government of eleven people, as well as other officials. A price and princess were selected to rule the country during the Fasching season. Political authorities, high placed persons and sovereigns were the target of ridicule, and featured in humorous and satirical speeches. To avoid persecution and punishment, these antics were played out from behind masks and costumes. Parades, dancing in the streets, masquerade balls and comical skits filled the days and nights.

Karneval festivities have become annual events around the world. Also known as Fasching, Carnival and Mardi Gras, the most famous are located in the following places:

Although Carnival in Rio is probably the craziest of all, Germany is undoubtedly the most enthusiastic Karneval center in Europe.

Nearly every town has its own festivities and it is celebrated in homes across the country with great enthusiasm. The Karnevals vary from area to area, but no matter where the celebrations are held, there is fun, happiness and laughter.