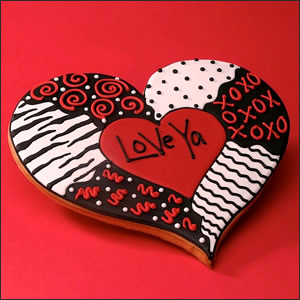 St. Valentine’s Day is approaching.. Holiday’s history and recipes — for you and your sweetheart!

“Love is the ultimate outlaw. It just won’t
adhere to any rules. The most any of us
can do is sign on as its accomplice.”
— Tom Robbins, Still Life With Woodpecker

St. Valentine’s Day (February 14) is the most romantic day of the whole year, the day of eternal, everlasting love and all sweethearts. Yet the reaction to this holiday is not always so totally romantic. Some wake up on St. Valentine’s Day all obsessed with that sweet feeling called love. Cupid lends them a pair of little wings and they hurry to the gift shops and the florists to pick presents for their beloved.

Others come shrieking awake with dread in their hearts and revenge on their lips. For them, it’s a day of gloomy dark emotions and it’s no wonder– the guy the day was named after was beheaded. There are several beliefs of how and why this outstanding day has gained its meaning:

♥ Some legends go back to erotic festivals in ancient Rome that happened to take place during February. Women would dress up as wolves and wait to be whipped by men wearing loin cloths. Today in Italy and Greece, young men still chase young women while brandishing whips – made of plastic. The Lupercalia (February 15), was a fertility festival until 495 A.D., when a pope put a stop to it.
♥ Another story says that Valentinus was a priest in third-century Rome who secretly married couples, although the Emperor had forbidden it.
♥ According to the other legend, Valentinus was a Christian imprisoned for refusing to worship pagan gods. Supposedly he cured his jailer’s blind daughter through prayers. On February 14, the day of his execution, he sent her a note, signed “Your Valentine.”
♥ Or perhaps he was the Bishop of Terni, born around 268 A.D., who was executed through decapitation for his Christian beliefs. He was said to present lovers with flowers.
Whatever the reasons may be, Valentine was canonized in Middle Ages, and ever since that time he has been all lovers’ protector.

On this day men and women send (sometimes anonymously) little presents, Valentine cards, chocolates, and flowers to their sweethearts. In Germany people give each other red roses as a token of love. The custom of exchanging presents between the lovers largely spread after World War II. Nowadays this beautiful holiday is the opportunity for the whole world to get away from their everyday fuss and worries, and let their hearts fill up with love and tenderness.