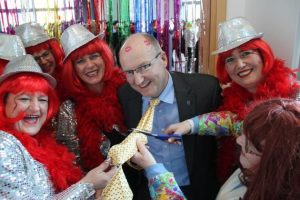 Michael Esken, mayor of the city of Verl, gets his tie cut off on Weiberfastnacht.
Photo by Kerstin Eigendorf

Weiberfastnacht is a holiday celebrated mostly in the Rhineland on the Thursday before Ash Wednesday. Originally a special day for women’s carnival, but now celebrated by both sexes as the beginning of the six-day peak of the carnival season. Women take charge of men on Carnival Thursday by cutting off their ties and giving them a kiss. The tradition hails from an era when women’s rights didn’t exist. The act dates back to pagan times and symbolizes the power of women and their ability to rule over men, especially in crazy times. 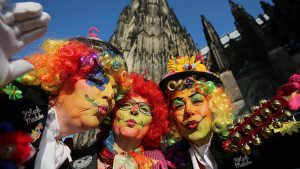 Today, Weiberfastnacht — composed of the words “weiber” (women) and “fastnacht,” another word for Carnival — lives on as a fun-filled, female tradition that takes place on the Thursday before Ash Wednesday. The unofficial holiday kicks off at exactly 11:11 a.m. with a street festival, and revelers don colorful, over-the-top costumes, and the annual “storming” of city hall is broadcast live on television. The festivities also include some interesting customs like “necktie-cutting,” a symbolic gesture to show men who’s boss. The men customarily get a kiss or a “Bützchen” in return for the chopped accessory. Basically, women run the show in every way on this celebratory day, and everyone gets to enjoy the spoils of a lady-led world with a parade, food, drinks and fun.

Maintaining your personal space is not exactly an option; close bodily contact with strangers is just as much a part of Carnival as music and beer. People link arms and sway to the Schlager, or do the “Stippeföttche,” a traditional dance that involves rubbing rear ends together.

In the Middle Ages, upper-class woman were allowed to throw their manners out the window on this day, which was dubbed “the drinking day for dear women.”

In the 18th century, some convents even recognized the anything-goes tradition and the nuns were permitted to feast, gamble and dance until the wee hours of the morning.

In the 19th century, a group of washerwoman in Beuel near Bonn, around 30 km (about 19 miles) south of Cologne, laid the foundation for the present-day Weiberfastnacht celebrations. 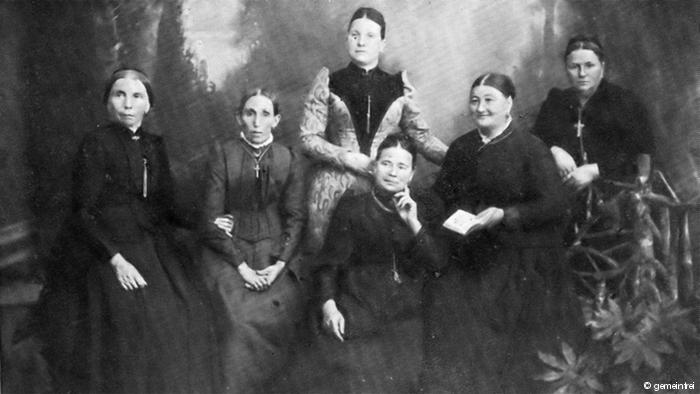 The Beuel Ladies’ Committee pictured in the year 1900

Back then, the washerwomen had to work 16 hours a day — and not only for the high-society men who could afford it, they also had to scrub their own husbands’ dirty laundry so that the men could go to Carnival parties in nearby Cologne in clean shirts. The wives had to stay at home to work and tend to the children.

In 1824, the washerwomen had finally had enough. They ditched their work and met in a pub to complain about their husbands. Obviously, they weren’t just sipping tea and coffee.

They founded the “Beuel Ladies’ Committee” and proceeded to storm the city hall in Beuel, claiming authority for a day. The tradition stuck and Bonn-Beuel became an important Carnival hub.

Word of what the women in Beuel had done spread quickly throughout the Rhineland. Women in many other cities and villages formed similar committees and proceeded to storm their city halls as well.

As a symbol of revoking the power of the men, the women started chopping off their neckties, which they collected like trophies. Of course, since the tradition is all in good fun, the men don’t go away empty-handed. Instead, they get a “Bützchen” — a smooch — in return. In this ritual, it’s the woman who chooses who she’s willing to kiss, though the unwritten rule remains that both partners must consent to locking lips.