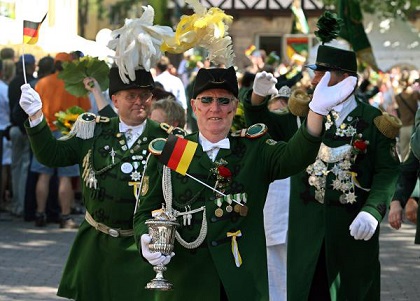 German customs and traditions take a very important place in everyday life. Traditions mean integration. People in Germany and other countries create their own customs and rituals in their strong drive to build community around themselves, such as celebrating certain occasions, cooking definite dishes for some holidays, wearing certain clothes on different occasions, setting up fan clubs, organizing sports sections, etc.

Customs and traditions provide assurance and an answer to the question “What am I going to do at that occasion?” They provide a framework, a set of signs and symbols, rules and roles, and appropriate dress. The greatest events in the passage of life–birth and death, christening and wedding– all have their traditional customs. Following them means respect for our predecessors who passed them over to us.

However, the rapid scientific-technological development in Germany in the 19th and especially 20th century greatly contributed to the transition from a predominantly rural-agricultural to an urban-industrial, even post-industrial, society. This has resulted in a loss of the initial meaning of many German customs and traditions that went without saying still couple of centuries ago. Nowadays there is a dangerous tendency that if they are even maintained in the folklore, less and less people will remember the true meaning and importance such customs and traditions had in earlier times.

Especially people of the younger generation tend to estrange themselves from their age-old traditional heritage and its true meaning. This happens often because of the association with the term “tradition” that bears a connotation of something fossilized and obsolete, and the tendency of customs and traditions over time to turn into meaningless and rigid prescriptions. This is not necessarily bad. Why, it is a natural process when many customs get given up as no longer relevant, and are only referred to in history. After all, there must also be room for cultural renewal and the uprise of new customs and traditions that correspond to the hopes and joys of today’s world.

German culture abounds in specific customs and traditions. People from all over the world are interested in this aspect of culture which is proved by a growing number of letters we get daily from the USA, Germany, France, Mexico, etc.