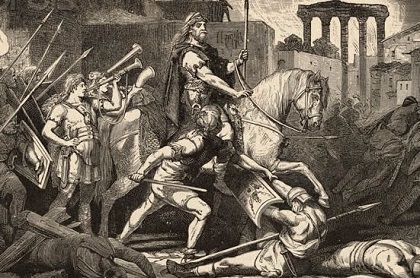 The Germanic tribes, which probably originated from a mixture of peoples along the Baltic Sea coast, inhabited the northern part of the European continent by about 500 B.C. By 100 B.C., they had advanced into the central and southern areas of present-day Germany. At that time, there were three major tribal groups: the eastern Germanic peoples lived along the Oder and Vistula rivers; the northern Germanic peoples inhabited the southern part of present-day Scandinavia; and the western Germanic peoples inhabited the extreme south of Jutland and the area between the North Sea and the Elbe, Rhine, and Main rivers. The Rhine provided a temporary boundary between Germanic and Roman territory after the defeat of the Suevian tribe by Julius Caesar about 70 B.C.

The threatening presence of warlike tribes beyond the Rhine prompted the Romans to pursue a campaign of expansion into Germanic territory. However, the defeat of the provincial governor Varus by Arminius at the Battle of the Teutoburg Forest in A.D. 9 halted Roman expansion; Arminius had learned the enemy’s strategies during his military training in the Roman armies. This battle brought about the liberation of the greater part of Germany from Roman domination. The Rhine River was once again the boundary line until the Romans reoccupied territory on its eastern bank and built the Limes, a fortification 300 kilometers long, in the first century A.D.

The second through the sixth centuries was a period of change and destruction in which eastern and western Germanic tribes left their native lands and settled in newly acquired territories. This period of Germanic history, which later supplied material for heroic epics, included the downfall of the Roman Empire and resulted in a considerable expansion of habitable area for the Germanic peoples. However, with the exception of those kingdoms established by Franks and Anglo-Saxons, Germanic kingdoms founded in such other parts of Europe as Italy and Spain were of relatively short duration because they were assimilated by the native populations. The conquest of Roman Gaul by Frankish tribes in the late fifth century became a milestone of European history; it was the Franks who were to become the founders of a civilized German state.