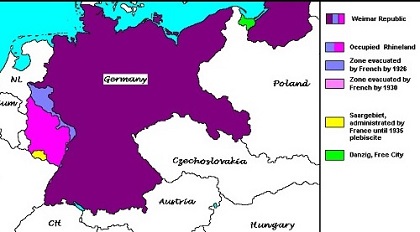 The Weimar Republic was beset with serious problems from the outset that led many Germans either to withhold support from the new parliamentary democracy or to seek actively to destroy it. The extreme left and much of the right provided the republic’s most vitriolic opponents. Its supporters included the bulk of the left, represented by the SPD, and the moderate right, made up of the Center Party and the DDP. However, at key times these supporters failed to behave responsibly because of political inexperience, narrow self-interest, or unrealistic party programs.

The most serious obstacle the new republic faced was the refusal of many Germans to accept its legitimacy. The extreme left regarded it as an instrument of the propertied to prevent revolution, recalling Ebert’s agreement with the military in November 1918 that resulted in the army’s bloody suppression of the left-wing revolts of late 1918 and early 1919. In the face of this SPD-military alliance, elements of the left considered the SPD as great a barrier to their goals as the conservatives. Represented by the Communist Party of Germany (Kommunistische Partei Deutschlands–KPD), the extreme left felt such an enduring hostility to the Weimar Republic that at times it cooperated with the extreme right in efforts to destroy the republic.

The right posed a graver threat to the Weimar Republic than did the extreme left because it enjoyed the support of most of Germany’s establishment: the military, the financial elites, the state bureaucracy, the educational system, and much of the press. Unlike political parties in well-established democracies, the right-wing parties in the Reichstag could not be considered a loyal opposition because their ultimate aim was to abolish the new system of government. The right opposed democracy and desired to establish a conservative authoritarian regime. The right styled those who were party to the armistice and to the Treaty of Versailles as “November criminals” because of Germany’s loss of territory and sovereignty and the burden of enormous war reparations. The increasing acceptance by many of the “stab in the back” legend, which attributed Germany’s defeat in World War I to the treachery of the SPD and others on the left rather than to the military might of the Allies, intensified the hatred many rightists felt toward the republic. Like some on the extreme left, many on the right used violence, either petty and random or large-scale and concerted, to attain their ends. Throughout the short life of the Weimar Republic, various political groups maintained gangs of youths organized into paramilitary forces. 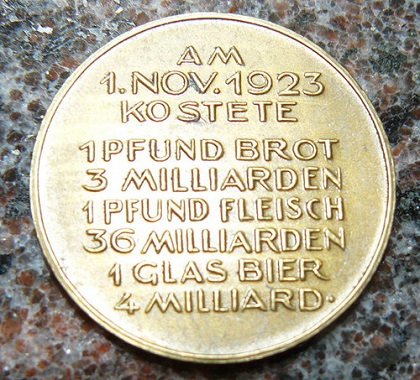 A medal commemorating Germany’s 1923 hyperinflation. The engraving reads: “On 1st November 1923 1 pound of bread cost 3 billion, 1 pound of meat: 36 billion, 1 glass of beer: 4 billion.”
In addition to venomous political opposition, the republic had to contend with a weak economy plagued by high rates of inflation and unemployment. Inflation was fueled partly by the enormous wartime debts the imperial government had contracted rather than raise taxes to finance the war. Even more inflationary were the enormous war reparations demanded by the Allies, which made economic recovery seem impossible to many objective expert observers. Inflation ruined many middle-class Germans, who saw their savings and pensions wiped out. Unemployment also remained epidemic throughout the 1920s, hurting millions of wage earners and their families. Their economic misery made these groups susceptible to the claims of extremist political parties.

The pervasive social and political discontent growing out of Germans’ grievances, justified or not, soon had consequences. A right-wing coup d’état in March 1920, the Kapp Putsch–named for its leader, Wolfgang Kapp–failed only because of a general strike.The military had refused to intervene, although it did brutally suppress some Communist-inspired uprisings shortly thereafter. The establishment’s tacit support of unlawful right-wing actions such as the Kapp Putsch and violent repression of the left endured to the end of the Weimar Republic. This support could also be seen in the sentences meted out by the courts to perpetrators of political violence. Right-wing terrorists usually received mild or negligible sentences, while those on the left were dealt with severely, even though left-wing violence was but a fraction of that committed by the right. 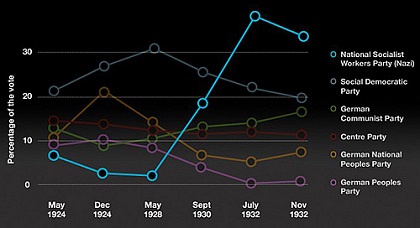 Dissatisfaction with the republic was also evident in the June 1920 elections, in which the Weimar coalition lost its majority. A combined total vote of 28.9 percent for the DNVP, a descendant of the prewar Conservatives, and the DVP, composed mainly of National Liberals, reflected German middle-class disillusionment with democracy. Both parties wished to abolish the Weimar constitution. SPD strength fell to 21.7 percent, as some workers defected to the extreme left. The Independent Social Democratic Party of Germany, formed during the war, effectively ceased to exist as some members joined the KPD, formed in December 1918, and the remainder reunited with the SPD.

The Weimar coalition never regained its majority. Because no party ever gained as much as 50 percent of the vote, unstable coalition governments became the rule in the 1920s, and by the end of the decade more than a dozen governments had been formed, none capable of unified action on major problems. The SPD and the Center Party often could agree on questions of foreign policy, such as compliance with the provisions of the Treaty of Versailles, but split on domestic issues. Conversely, the Center Party agreed with parties to its right on domestic issues but split with them on foreign policy. Thus, minority governments were formed that often showed little internal coherence during their brief lives. 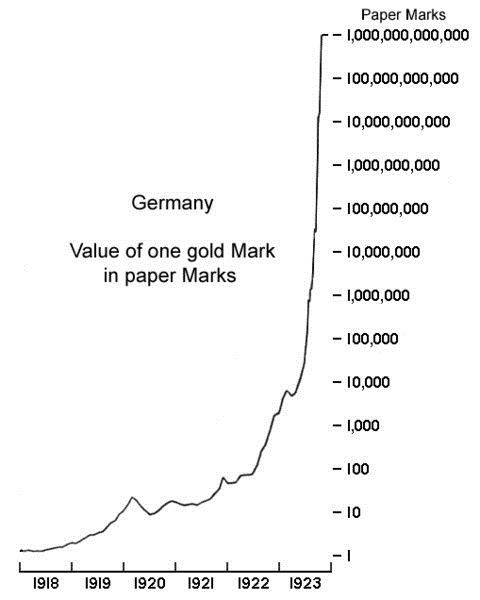 Weimar Republic hyperinflation from one to one trillion paper Marks per gold Mark; on a logarithmic scale

The year 1923 was one of crisis for the republic. In January French and Belgian troops occupied the highly industrialized Ruhr area because of German defaults on reparations payments. The Weimar government responded by calling upon the Ruhr population to stop all industrial activity. The government also began printing money at such a rate that it soon became virtually worthless; by the fall of 1923, wheelbarrows were needed to carry enough currency for simple purchases as inflation reached rates beyond comprehension. In 1914 US$1 had equaled 4 marks. By mid-1920, US$1 was worth 40 marks, by early 1922 about 200 marks, a year later 18,000 marks, and by November 1923 — 4.2 trillion marks. In addition, the country was racked by strikes, paramilitary street violence, and rumors of planned uprisings by both the left and the right. In August, in the midst of this chaos, President Ebert asked Gustav Stresemann, head of the DVP, to form a new government to resolve the crisis.

Related articles:
The Weimar Republic, 1918-33
The Stresemann Era
Hitler and the Rise of National Socialism