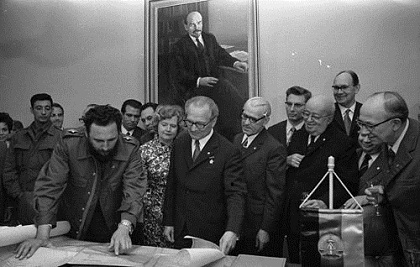 Ulbricht’s successor in East Germany was Erich Honecker. Born in 1913 in Saarland, Honecker joined the Communist Party of Germany (Kommunistische Partei Deutschlands–KPD) in 1929. As a full-time functionary of the party, he continued his work in the underground movement after Hitler came to power in 1933 and until arrested by the Nazis in 1935. Imprisoned until the end of World War II, Honecker resumed his career in 1945 as a leading KPD functionary, becoming Ulbricht’s assistant on the latter’s return to Germany from the Soviet Union in 1945. From 1946 to 1955, Honecker served as chairman of the youth organization, the Free German Youth (Freie Deutsche Jugend–FDJ).

He became a member of the SED Politburo in 1958. As secretary for security matters of the SED Central Committee, Honecker was directly responsible for the building of the Berlin Wall in 1961. When Ulbricht was removed from power in 1971, Honecker succeeded him in his party functions and became chief of the SED. Honecker was head of state of the GDR from 1976 until his resignation in 1989. After his fall from power, Honecker found refuge in the Embassy of Chile in Moscow until his extradition to Berlin in 1992, where he was brought to trial. He was released from custody in 1993 for health reasons and went to Chile, where he died in 1994. Although less rigid than Ulbricht, as evidenced by his willingness to sign agreements with the West that opened the GDR somewhat and made the lives of its citizens easier, Honecker remained a convinced communist until his death.

Related articles:
The Conference on Security and Cooperation in Europe
The New East German Constitution and the Question of Identity
Relations Between the Two Germanys
The Peace Movement and Internal Resistance in GDR
The Last Days of East Germany