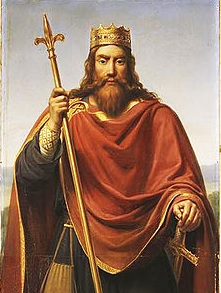 In Gaul a fusion of Roman and Germanic societies occurred. Clovis, a Salian Frank belonging to a family supposedly descended from a mythical hero named Merovech, became the absolute ruler of a Germanic kingdom of mixed Roman-Germanic population in 486. He consolidated his rule with victories over the Gallo-Romans and all the Frankish tribes, and his successors made other Germanic tribes subjects of the Merovingian Dynasty.

The remaining 250 years of the dynasty, however, were marked by internecine struggles and a gradual decline. During the period of Merovingian rule, the Franks reluctantly began to adopt Christianity following the baptism of Clovis, an event that inaugurated the alliance between the Frankish kingdom and the Roman Catholic Church. The most notable of the missionaries responsible for Christianizing the tribes living in Germany was Saint Boniface (ca. 675-754), an English missionary who is considered the founder of German Christianity.