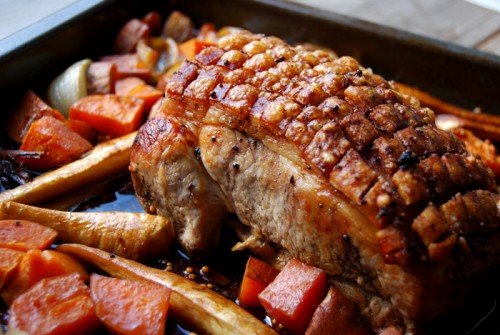 This is the ultimate roast – Bavarian beer roasted pork, also known as Bayerischer Schweinebraten or Krustenbraten – tender, juicy meat and crunchy crackling on top, perfectly roasted and crispy. This is hearty, honest autumn food, for those cold nights after a long walk out in the countryside.

1500 g / 3.5 pounds of pork, shoulder piece, boned, scored,
(if you use a piece of pork with the bone leave it in the oven for 1 – 1  1/2 hours after you poured over the beer)
10 cloves, ground in a mortar
2 heaped teaspoons of salt
500 ml / 1 pint beer
3 medium sized onions, quartered
2 sweet potatoes, scrubbed, cut into cubes
3 parsnips, scrubbed, cut into cubes
1 cinnamon stick, broken into 3 pieces
star anise, 3 single pieces
2 heaped tablespoons of mustard seeds