When you think of German cuisine, generally two things come to mind: sauerkraut and something including meat. Germans love meat. Minced meat especially. They love it so much, they even eat it raw, especially in the North, where it’s spread on a bread roll, sprinkled with chopped onions, and eaten for breakfast.

Mett is a German delicacy of raw minced pork, which is often purchased from the butcher already spiced with salt and pepper, sometimes garlic and ground caraway. In northern Germany, it is known as Hackepeter.

If raw onion is added, then it is called Zwiebelmett. If onion and rubbed marjoram are added, it is known as Thüringer mett. Legally, German Mett is not allowed to contain more than 35% fat. Unless pre-packaged, the German Lebensmittelhygiene-Verordnung (“food hygiene/health directive”) permits Mett to be sold only on the day of production. 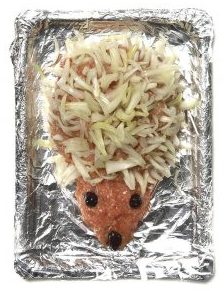 Raw Mett is normally eaten on bread bun (Mettbrötchen) or sliced bread, frequently with a garnish of raw onion rings or diced raw onion. The cultural importance of raw pork should not be underestimated. Some companies allow, or positively encourage, Mettwoch, the custom of eating Mettbrötchen on Mittwoch (Wednesday).

At buffets, Mett is occasionally served as a Mettigel (Mett hedgehog, also Hackepeterigel or Hackepeterschwein). This form of serving Mett was especially popular in the 1970s. To produce it, a large amount of Mett is shaped as a hedgehog, quartered onion rings or pretzel sticks are used as spikes, olives as eyes and nose.

In parts of Southern Germany Mett (Mettstange) is served on a Lye bun instead of a regular bun.

Eating raw pork and raw beef is common in Germany, but Mett can also be cooked. It should be handled like any spiced, bulk sausage meat bought in the store. It can be mixed with other meats and baked into meatballs, meatloaf, or sausage patties.

While serving Mettbrötchen, not much has to be done. The Germans usually eat them raw or by simply using the seasoning of salt and pepper. There are indeed other more elaborated methods of cooking and presenting but the simple love for minced meat overpowers everything else.