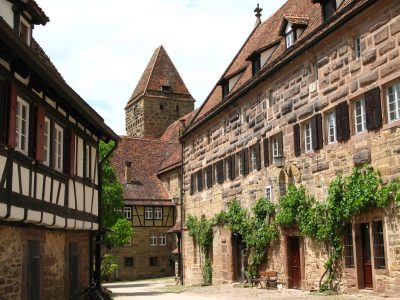 Maulbronn Monastery (Kloster Maulbronn) is one of Europe’s most complete and bestpreserved Medieval monastery complexes. It combines a multitude of architectural styles, from Romanesque to late Gothic, in one place – creating a unique atmosphere.

Construction of the former Cistercian abbey, cradled in the rolling hills of the Stromberg region, commenced in 1147. It was here that Gothic design was first implemented in the German-speaking world. In 1993, the monastery was declared a UNESCO World Heritage site.

Maulbronn’s many buildings are enclosed by Medieval walls and towers. Architectural highlights include the Romanesque monastery church, the Gothic cloister, and the fountain house.

The monastery church’s entrance hall, the Paradies, takes its name from the custom of painting church vestibules’ walls with scenes from the Fall of Man. In Maulbronn, the last painting was completed in 1522. However, little of this work of art remains visible. The Paradies, the cloister’s south wing, and the monks’ refectory were constructed in the late Romanesque, transitional early Gothic style. These structures played a vital role in spreading the Gothic architectural style throughout German-speaking Europe. The Cistercians have traditionally worked the land. This is why their cultural and architectural influences extended well beyond the walls of the monastery. The surrounding countryside was formerly dotted with their farms, called granges. The Maulbronn monastery complex has been preserved remarkably well, and is an impressive representation of the region’s history and the Cistercians’ way of life.

After the Reformation, Duke Christoph of Württemberg, converted the complex into a Protestant boarding school. Its pupils included prominent scientists and writers including Johannes Kepler, Friedrich Hölderlin and Hermann Hesse. The school still exists, but is called today Evangelical theological seminary.

After being named a UNESCO World Heritage site, the monastery complex has become a world-famous landmark, attracting tourists from around the globe. It also serves as a concert venue, giving visitors the opportunity to appreciate the buildings’ out-of-the-ordinary acoustics.