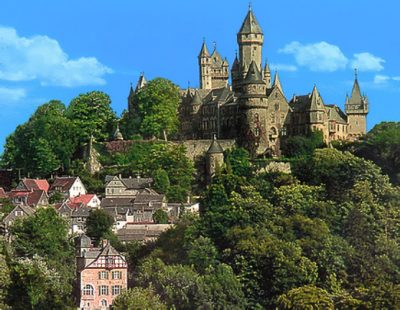 Castle Braunfels is located on a basalt rock west of the health resort Braunfels in the Central Hessian Lahn-Dill-Kreis. The castle soars 100 m (328 ft) above the Lahn valley. It has been the seat of the Counts of Solms since the 13th century and is still owned by the counts of Oppersdorff and Solms-Braunfels in the 21st century.

As Castellum Bruninvels, the castle was first documented in 1246. Originally a defensive stronghold against the counts of Nassau, it became the residence of the Counts of Solms in 1280.

The palace’s appearance has changed much over the years, with new additions to the complex as well as the destruction of other parts. In 1679, much of Braunfels was incinerated in a terrible fire. Count Heinrich Trajektin was responsible for the reconstruction.

In 1845, Braunfels Castle underwent a renovation at the hands of the “Hunter Prince” Ferdinand who rebuilt parts of it in the Gothic Revival style and added its famous Knights Hall. 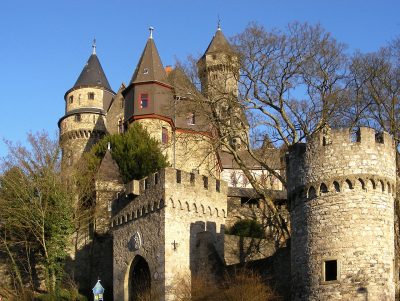 View from the west with Kleppertor

The castle got yet another makeover just 35 years later by Prince George. He is the man to thank for the castle’s present look. Much of its unique features, like the towers and bay windows, can be attributed to him.

The interiors are designed as a museum and partially accessible with a guide. The princely representative rooms, the collections from Altenberg Abbey and the Family Museum must be distinguished.

The furniture and the art-historical collections of the Princely Family of Solms cover the time period from the 13th to the 19th century.

The so-called “Altenberger rooms” include inventory from the former monastery Altenberg. In its secularization with the Reichsdeputationshauptschluss 1803, the princes of Solms took over the institution.

The Family Museum in the Long Building (individually accessible by coin slot) contains other weapons and art collections, coins, medals, garments and a collection of Bohemian glass of the Dukes of Solms. There is also a prehistoric department, which is due to a collaboration between Prince William in 1815 with the archives Jakob-Carl Schaum, which was in close correspondence with Johann Wolfgang Goethe. An unexplained find is a fertility god from the 3rd millennium BC. Excavated in 1959 in Kraftolms, of a kind that is commonly found in Asia Minor. Other family-owned antiques include a collection of Meissen porcelain and a Bohemian glass collection, a sculpture collection and silverware.