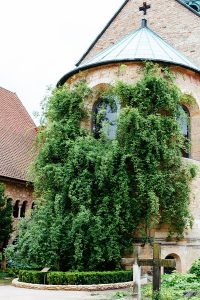 The Thousand-year Rose (Tausendjähriger Rosenstock) is also known as the Rose of Hildesheim. It grows on a wall of the Hildesheim Cathedral, a Catholic cathedral in Hildesheim, Germany, that is dedicated to the Assumption of Mary. The cathedral and the adjacent St. Michael’s Church have been on the UNESCO list of World Heritage Sites since 1985.

The rose that climbs on the wall of the cathedral’s apse is believed to be the oldest living rose in the world. A Rosa canina, commonly known as a wild dog rose, grows against the eastern apse of the cathedral, which is around 21 m (69 ft) high and 9 m (30 ft) wide. The rose bush reaches a height of around 10 m (33 ft) and documentation verifies its age at approximately 700 years. Slight variations arise in the tale of the establishment of the diocese by King Louis the Pious at Hildesheim in 815 but the rose bush is a common theme in all versions. The Cathedral was destroyed by Allied bombers in 1945 during the Second World War, but the roots of the rose bush survived and it blossomed again among the ruins. According to legend, while the rose bush flourishes, Hildesheim will prosper.

A poem about the rose was published in 1896. In the early twentieth century, after visiting the Cathedral and seeing the rose, author Mabel Wagnalls was inspired to write a book, which went on to form the basis of a silent film.

Inspiration for the book entitled The Rose-bush of a Thousand Years came from the rose at Hildesheim. Written by Mabel Wagnalls and published in 1918, it is a tale about a young girl abandoning her baby to the care of a convent. The mother later gains notoriety, has a “spiritual transformation” and rekindles a relationship with her child. The story went on to form the basis for the 1924 silent film Revelation. The ninety-minute film starred Viola Dana, Monte Blue and Lew Cody. It was written and directed by George D. Baker.

The rose at Hildesheim is a Rosa canina, also called a dog rose. According to the legend, it dates back to the establishment of the diocese of Hildesheim, around 815. The buildings were constructed around the area in which the rose was growing.

In 1909, in his book Romantic Germany, Robert Schauffler tells the legend of the rose. In 815 Emperor Louis the Pious (778–840), son of Charlemagne, was hunting in the Hercynian Forest. While he was hunting a white buck, he became separated from his fellow hunters and lost his game and horse. He tried to summon help with his hunting-horn, but nobody answered the call. Disoriented and alone, he swam across the Innerste river then walked all day until he arrived at a mound covered with a wild rose, the symbol of the old Saxon goddess Hulda. The Emperor had a reliquary containing relics of the Virgin Mary over which he prayed for rescue until he fell asleep. 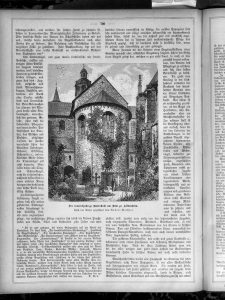 An illustration of the rose in the German journal Die Gartenlaube (The Garden Arbor), 1883, p. 700

When he woke up, the mound was covered with glittering white snow despite it being the middle of summer. The bush was in full bloom, the grass was lush and the trees were covered in leaves. He looked for his reliquary and saw it was covered in ice between the branches of the rose-bush. The Emperor’s interpretation of this miracle was that the goddess was sending him a sign by “shaking her bed” that the Virgin should in future be venerated instead of her. Hulda is depicted as a maiden in snow-white clothes – she is the protector of women’s crafts but also associated with wilderness and winter – when it snows, it is said that Hulda is shaking out her feather pillow. When his followers finally found the Emperor he pledged that he would construct a cathedral to honor the Virgin where the mound with the rose was. He did spare the rose, and built the cathedral in a way that the rose is growing now behind the altar in the apse. After more than a thousand years, the same rose bush still blossoms.

According to a different version of the legend, the German emperor Louis the Pious lost his cherished reliquary while chasing game and promised that he would erect a chapel wherever it was discovered. The reliquary was found on the branches of a wild rose and the Emperor constructed the sanctuary beside the rose, with the altar close to the site where the rose was growing. 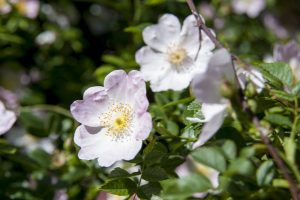 The Rose of Hildesheim in bloom

Another slight variation to the legend is given in Fundatio Ecclesiae Hildensemens, an 11th-century publication. The Emperor had taken the reliquary to use when he stopped to say Mass while out hunting. The artefact was placed in a tree while the sermon was undertaken but not retrieved when the hunt resumed. Later a chaplain was unable to remove the reliquary from the branches. Believing this to be a symbol of God’s will, the Emperor had a church constructed there instead of as originally planned at Elze.