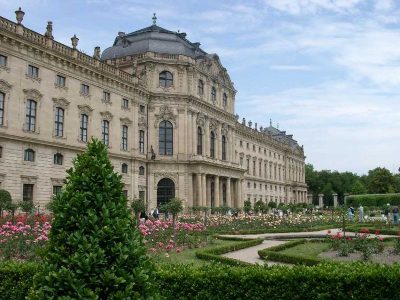 The Würzburg Residence (Würzburger Residenz) is a palace in Würzburg, Germany. Balthasar Neumann, court architect of the Bishop of Würzburg, was the principal architect of the Residence, which was commissioned by the Prince-Bishop of Würzburg Johann Philipp Franz von Schönborn and his brother Friedrich Carl von Schönborn in 1720, and completed in 1744. The Venetian painter Giovanni Battista Tiepolo, assisted by his son, Domenico, painted frescoes in the building.

Interiors, considered masterworks of Baroque/Rococo or Neoclassical architecture and art, include the grand staircase, the chapel, and the Imperial Hall. The building was reportedly called the “largest parsonage in Europe” by Napoleon. It was heavily damaged during World War II, and restoration has been in progress since 1945. Since 1981, the Residence has been a UNESCO World Heritage Site.

Unlike the Munich Residence, which evolved over some five hundred years and thus incorporates the styles of quite different periods, the Würzburg Residence was built in its entirety, with short interruptions, almost within a single generation.

The architects drew their inspiration from an area extending from Vienna to Paris and from Genoa and Venice to Amsterdam. The building embodies the attainments of Western architecture of its day, French château architecture, Viennese baroque and the religious and secular architecture of northern Italy and is a synthesis of the arts of astonishing universality.

Front of the Residence and Cour d’honneur

The Würzburg court architect, Balthasar Neumann, who was entrused with the coordination of the massive building project, had to work not only with the leading architects of Germany and France – with Lucas von Hildebrandt and Maximilian von Welsch, with Robert de Cotte and Germain Boffrand – but also with numerous artists such as the Italian Antonio Bossi, the “ornamentation genius” of the Würzburg Residence, the gifted sculptors and woodcarvers Johann Wolfgang van der Auwera from Würzburg and Georg Adam Guthmann from Munich, and not least with Giovanni Battista Tiepolo, the greatest fresco painter of the 18th century.

Balthasar Neumann’s incomparable suite of rooms – vestibule, staircase, White Hall and Imperial Hall – one of the most magnificent in the history of palace architecture, was decorated and furnished by these artists and craftsmen in a joint creative undertaking which also produced “Würzburg rococo”, the most exuberant of all the variations of this style in Germany.

The Würzburg Residence is moreover by no means the work of the artists alone, but equally that of its various great owners, who, in addition to providing the financial and political means, gave this gigantic building international standing through their widespread connections, which extended far beyond their own lands. These owners were the Counts of Schönborn.

Almost all the ecclesiastical princes from this dynasty had a passion for building, and influenced the planning not only through the level of splendor they demanded, but also through application of their own creative ideas and their astonishing professional knowledge. The Würzburg Residence, on which the patronage of the extraordinary family was concentrated, is the magnificent result of this Schönborn passion.

As a result of a devastating air raid on March 16, 1945, the residence was almost completely burnt out and only the central building with the Vestibule, Garden Hall, Staircase, White Hall and Imperial Hall survived the inferno, their roofs destroyed. From the attic the fire ate down through wooden ceilings and floors, and all the furnishings and wall paneling which had not been stored elsewhere were devoured by the flames. Much of the furnishing and large sections of the wall paneling of the period rooms had been removed in time and thus escaped destruction. Neumann’s stone vaults withstood the collapse of the burning attic. However, because the roofs had gone, further damage was incurred in the ensuing period due to dampness. In the Court Chapel, for example, most of the ceiling frescoes by Byss succumbed to the subsequent consequences of the fire, in spite of the intact vault, and had to be laboriously reconstructed.