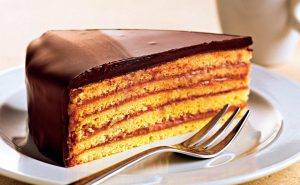 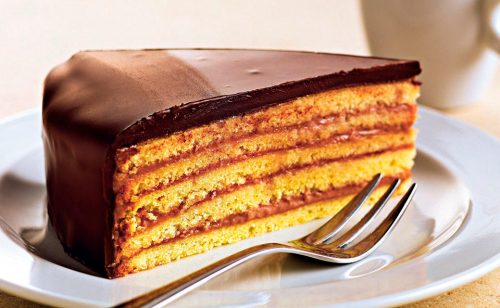 Prinzregententorte is a Bavarian torte consisting of several thin layers of sponge cake with chocolate buttercream filling and a topping of apricot jam upon the very last. The exterior is covered in a dark chocolate glaze. Prinzregententorte was created in the honor of Luitpold, the Prince Regent. Luitpold is rather revered by the Bavarians and his reign as Regent is looked back on as a Golden Age. So a certain Heinrich Georg Erbshäuser who was a baker by profession is said to have created the cake in the year 1886 honoring Luitpold.

Prinzregententorte usually consists of 8 layers. It is interesting to note that the number 8 also carried certain significance. The figure 8 represented the eight Bavarian districts – Swabia, Upper Bavaria, Lower Bavaria, Middle Franconia, Lower Franconia, Upper Franconia, Upper Palatinate, and Rheinpfalz or the Rhenish Palatinate. Today, however, Bavaria has only seven districts and the very last in the above list – Rheinpfalz or the Rhenish Palatinate is no longer considered as a district. It is a part of the state of Rhineland-Palatinate in Germany. Therefore the cake can have 7 layers now.

1. Preheat the oven to 190 degrees C. Let the eggs and butter sit at room temperature for about 30 minutes.
2. Beat the butter in a large mixing bowl for 1 minute.
3. Add sugar and beat for another minute.
4. Add one egg at the time, beating after each addition.
5. Beat in vanilla.
6. Mix in flour, baking powder, and salt.
7. Add milk, beat well for about a minute.
8. Divide the dough into 7 equal parts, either by weighing or by simply eyeballing it. Spread each of the seven parts of dough onto a sheet of baking paper. To make it easier, draw a circle on a piece of paper, then put baking paper on top and spread the dough using the circle shape under the baking paper. Bake for about 10 minutes, do a toothpick check, bake a couple minutes longer if needed.
9. Cool for a few minutes then take the layers out of the baking pans and cool completely.

1. Warm the chocolate in a double boiler until melted and allow to cool slightly.
2. Beat the butter until it is fluffy (about 3-5 minutes) and then fold in the icing sugar and the egg yolk alternately, beating after each addition.
3. The mixture should be very fluffy.
4. Gradually fold in the melted chocolate drop by drop.
5. Spread the cream on five (not the top one) of the cake layers and place them one on top of the other.

1. Bring the heavy cream to boil, be careful not to let it actually boil or it will rise.
2. Pour the boiling cream over the chopped chocolate and stir until melted. Cool to a little warmer than room temperature.
3. Spoon the chocolate frosting on top of the cupcake and let is slowly spread. If it does not spread too easy, help it with the edge of the rubber spatula very carefully. Make sure the sides and the top are perfectly smooth. Let the cake sit at cool room temperature for at least an hour before serving. 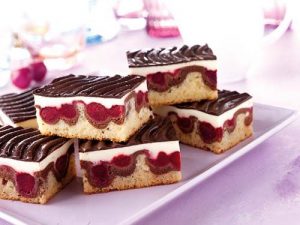 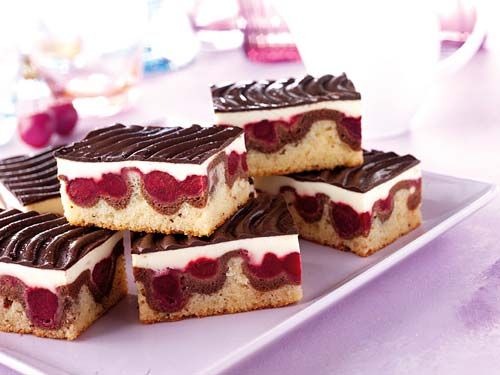 Donauwelle Kuchen (Danube Wave Cake) is an incredible dessert with layers of vanilla and chocolate cake, cherries, German buttercream, and ganache. After the cake is baked and cooled off a chocolate glaze is applied to the top of the cake and waves are made using a fork. When the cake is cut in squares it looks a little like the waves of the Danube river from the side. The Donauwelle cake looks very elegant and tastes great with the different flavors.

For the buttercream layer:

For the chocolate ganache topping:

2. Beat butter in a large bowl using an electric mixer until smooth. Gradually add sugar and beat until light and fluffy. Add eggs and vanilla, one at a time, beating well after each addition.

4. Spread cherries over batter. Press cherries lightly into batter with a spoon or spatula. Bake in the bottom third of oven for about 35 minutes, or until a toothpick or cake tester inserted in the center comes out clean. Cool cake completely in the pan on a wire rack.

For the buttercream layer:

1. Whisk together cornstarch, sugar, egg yolks, salt, vanilla and 1/4 cup milk in a medium bowl. Bring the remaining 2 cups milk to a low boil in a medium saucepan. Remove from heat.

2. Add 1/2 of the heated milk slowly to egg yolk mixture, on ladle at time, and whisking while adding (to temper the mixture and not cook the egg yolks). Add tempered egg mixture slowly back to the saucepan, whisking while adding. Bring mixture to a slow boil over medium heat, stirring constantly. When mixture begins to thicken, switch to whisking until mixture comes to a simmer. It will be very thick.

3. Transfer mixture to a bowl and place plastic wrap directly on the surface to prevent a skin from forming on top. This is similar to a thick pudding at this point. Cool pudding to room temperature. Use an instant-read thermometer to check temperature and do not proceed to the next step until it is at room temperature. If pudding is too warm it will melt the butter in the next step.

4. Beat butter until smooth. Add cooled pudding, about 2 tablespoons at a time, to butter and mixing well after each addition. Spread on top of cooled cake. Place plastic wrap directly on top. Chill cake for at least 1 hour or better yet overnight.

For the chocolate ganache topping:

1. Use a large knife to chop chocolate into very small pieces. The thinner the pieces (almost like shaving), the better. Place chocolate in a medium bowl.

2. Bring cream just to a low boil over medium-high heat. Pour heated cream over chocolate. Let sit for 5 minutes. Gently stir until combined. You do not want to incorporate air or bubbles into the mixture so stir gently and slowly.

3. Remove plastic wrap from top of cake. Pour ganache over cake. Allow to cool for a few minutes.
Drag a pastry comb or a fork back and over ganache to make a wave pattern. Keep cake covered and chilled when not serving.

These fun little bread rolls are perfect as a side dish to a soup or as a small snack. 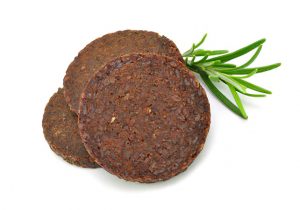 Pumpernickel is a typically heavy, slightly sweet rye bread traditionally made with sourdough starter and coarsely ground rye. It is often made today with a combination of rye flour and whole rye berries. Pumpernickel has been long associated with the Westphalia region of Germany, first referred to in print in 1450. Although it is not known whether this and other early references refer to precisely the bread that came to be known as Pumpernickel, Westphalian pumpernickel is distinguished by use of coarse rye meal and a very long baking period, which gives the bread its characteristic dark color. Like most traditional all-rye breads, pumpernickel is traditionally made with an acidic sourdough starter. Pumpernickel has a rich dark-brown color, but no crust as it’s baked in fully covered baking tins.

Making Pumpernickel the proper way takes some effort and time, so be prepared for the delayed gratification effect!

Getting started:
For the dough: 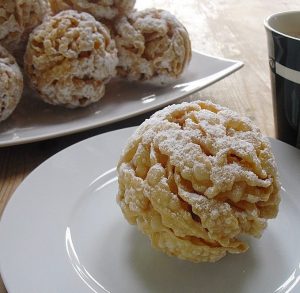 A Schneeball (snowball), is a pastry made from shortcrust pastry and is especially popular in the area of Rothenburg ob der Tauber. Its name derives from its round, ball-like shape, with a diameter of about eight to ten centimeters, and its traditional decoration with white confectioner’s sugar. It is also called a Storchennest (stork’s nest).

This kind of pastry has been known for at least 300 years in the regions of Franconia and Hohenlohe (northeast of Baden-Württemberg) where it is very popular. Served only on special occasions such as weddings in the past; they are nowadays available throughout the year and can be found around Rothenburg ob der Tauber in bakeries, pastry shops, and cafes. 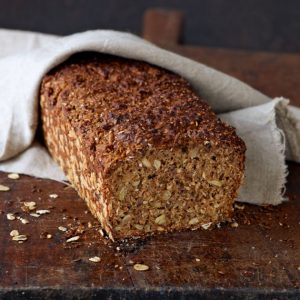 Experience the flavor and texture of Vollkornbrot like fresh from the German bakery! Dense, chewy, packed with nutrition and full of flavor, this German Vollkornbrot is wonderful with your choice of butter, jam, Nutella, cheese, or cold cuts. It features a grain called Einkorn that is used throughout much of western Europe, though you can substitute other grains as noted in the recipe. 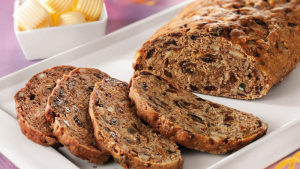 Hutzelbrot is a sweet winter bread treat with loads of dried fruit which keeps very well and tastes delicious on its own or with fresh butter at tea time.

These fruit loaves have many names: originally it’s called ‘Hutzelbrot’ as it is made of dried pears (‘Hutzeln’), but other regional names as ‘Schnitzbrot’, ‘Kletzenbrot’ or simply ‘Früchtebrot’, ‘fruit bread’. The stingy Swabian farmers’ wives would dry the leftover pears to avoid food wastage. It was traditionally made on St. Thomas’ day, December 21st, the winter solstice. The wives and maids would embrace their fruit trees with their arms still full of dough to ensure a good harvest in the following year.

Each valley, village and family will have their own recipe for this traditionally yeast-based bread. Although dried pears give it its name, they can easily be replaced by whatever dried fruit you have available. And you don’t have to wait until St. Thomas to bake it, you will want to give it a few weeks to mellow: like a Christmas cake or a pudding good things take their time.

Franzbrötchen is a small, sweet pastry, baked with butter and cinnamon. Sometimes other ingredients are used as well, such as chocolate or raisins. It is a type of pastry commonly found in northern Germany, especially Hamburg, and it is usually served for breakfast, but is also enjoyed along with coffee and cake.

As its name indicates, the Franzbrötchen was probably inspired by French pastries. Originally, it could be found only in the region of Hamburg, but now Franzbrötchen are also sold in Bremen, Berlin and other German cities. 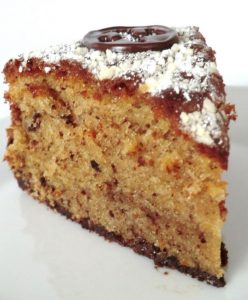 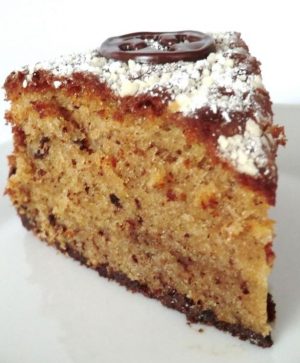 Juicy, moist hazelnut cake is a perfect choice for dessert and extremely easy to make – which is another advantage of this wonderful cake. 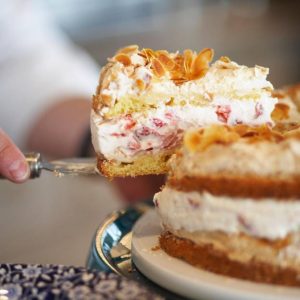 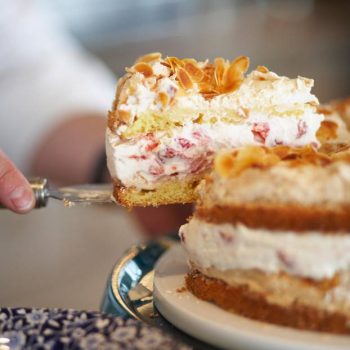 This cake can be baked all year round. If there are no gooseberries, you can use any other fruit like blueberries, strawberries, rhubarb, peaches, apples, raspberries. The cake just needs a fruity filling, otherwise it stays the same and incredibly delicious.