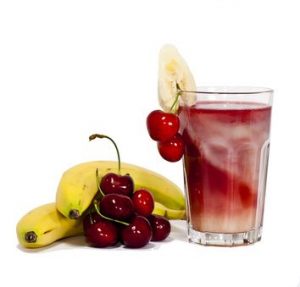 No matter how hot the weather, Germany has got you covered! 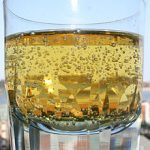 1. Schorle is a beverage where sparkling mineral water and juice are mixed, comparable to a spritzer. This is as refreshing as a soft drink on a hot day, but with less calories and sugar. The most common varieties of Schorle are Apfelschorle, apple juice mixed with sparkling water, followed by Johannisbeerschorle, red currant mixed with sparkling water. Most soda machines and supermarkets have some form of Schorle available and many restaurants list it on their menu. In case you do not see it on the menu, feel free to ask your server. 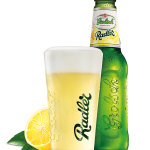 2. Radler is one of the most popular alcoholic drinks among Germans, which simply is beer mixed with sparkling lemonade. Radler is available pre-mixed in a bottle or the server or bartender will make it upon ordering. Don’t try mixing Fanta instead of sparkling lemonade with beer, it is not comparable to Radler at all. While no one seems to know the exact origin of the word Radler, one source traces it back to being used by cycling clubs, since the translation of Radler is biker. On the menu it can also be called Alsterwasser or just Alster in Hamburg. 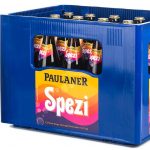 3. Spezi is a soft drink mix of cola, orange soda, orange juice, and lemon juice. The most popular brand names being Pepsi’s Schwip Schwap or Coca Cola’s Mezzo Mix. Make sure it is chilled. 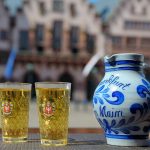 4. Apfelwein is a cider which is most popular in the Frankfurt am Main region. It has an alcohol content of about 6% and a sour, tart apple taste. It is traditionally served in a glass with diamond-cut ridges called Geripptes. The way to order Apfelwein varies depending on how many people at your table are drinking it. To order it by the glass for one person, order a Schoppen. To order a large amount to share with the table, ask for a Bembel, a stoneware pitcher of Apfelwein. Other regional names for Apfelwein are Äppler, Ebbelwoi or Stöffsche. 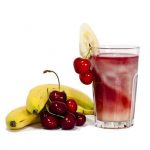 5. KiBa is the coolest-looking drink out of all of these and is short for Kirsch Banane. Kirsch translates as “cherry”, Banane means “banana”, and to make the drink you simply need cherry and banana juice. If you are curious and want to make the drink before you take off to Germany, make sure to chill the bottles in the fridge as it tastes best cold! You’ll need half a glass of banana juice, then slowly add the cherry juice which will go to the bottom of the glass and give you a colorful, layered effect. 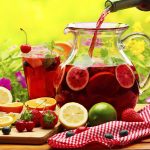 6. Bowle is the Germans’ way of describing a punch containing chunks of juicy, refreshing fruit. It’s usually served in a large glass punch bowl which goes by the same name. Most German punches include juice, lemonade or sparkling wine as well as white wine, and there might be a dash of rum or other spirits added. Of course, there are always the non-alcoholic versions for kids or teetotallers too. 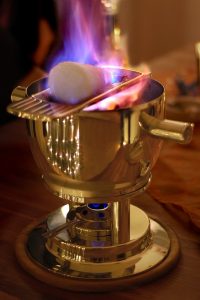 Feuerzangenbowle is a traditional German alcoholic drink for which a rum-soaked sugarloaf is set on fire and drips into mulled wine. It is often part of a Christmas or New Year’s Eve tradition. The name translates literally to “fire-tongs punch”. Glühwein (spiced mulled wine) is quite popular during the winter months in Germany. But if you are looking to kick things up a notch, you may find this drink a lot more interesting.

The popularity of the drink was boosted in Germany by the 1944 film comedy Die Feuerzangenbowle. It is a traditional drink of some German fraternities, who also call it Krambambuli, as the red color is reminiscent of a cherry liqueur of that name which was manufactured by the distillery Der Lachs zu Danzig.

SAFETY: be very careful, you are going to be dealing with alcohol and fire. Take the necessary precautions! 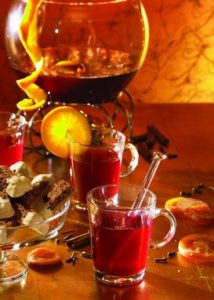 Feuerzangenbowle is prepared in a bowl, similar to a fondue set, which is usually suspended over a small burner. The bowl is filled with heated dry red wine spiced with cinnamon sticks, cloves, ginger and orange peel, similar to mulled wine. The Feuerzange was originally a pair of tongs, but nowadays it is common for a purpose-designed metal grate mounted on top of the bowl to hold the Zuckerhut (“sugarloaf”, or literally “sugar hat”), a sugar cone of 250 g. The sugar is soaked with rum and set alight, melting and caramelizing. The rum should have at least 54% alcohol per volume and be at room temperature in order to burn properly. More rum is poured with a ladle until all the sugar has melted and mixed with the wine. The resulting punch is served in mugs while the burner keeps the bowl warm. For some the ceremony is more important than the drink itself, celebrating the gathering of friends and conveying a notion of Gemütlichkeit (“cozy atmosphere”).

Note: Extreme caution must be taken when handling alcohol and open flame, particularly with high alcohol content ingredients. Use long wooden matches or extended candle lighters to ignite the sugar, NOT SHORT MATCHES or cigarette lighters. Be very careful that nothing flammable like paper or cloth are around. We disclaim any responsibility if you burn yourself or property out of negligence. 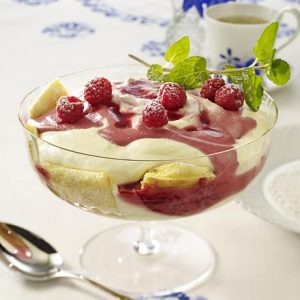 A dessert that really tastes like Sunday. Plettenpudding is a kind of trifle with vanilla pudding and raspberries. This dessert is featured in one of Germany’s most popular novels, the family epic The Buddenbrooks by Thomas Mann. The Lübeck-born author won the Nobel Prize for literature for his first novel which he wrote in his mid-twenties. 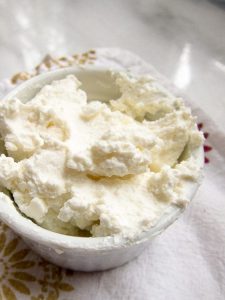 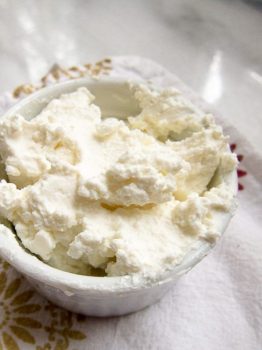 Quark is a traditional, creamy, unripened cheese tracing its origin to German-speaking and eastern European countries. Quark is said to be a cross between yogurt and cottage cheese.

This fresh, soft, white cheese is prepared from pasteurised cow’s milk with a small amount of acid added to achieve a good, firm curd. However, traditional quark is a purely fresh dairy product and does not make use of acid.

It is moist, snowy white in color with a subtle taste and smooth and soft texture. Its texture is similar to that of cream cheese, pot cheese or ricotta with a fat content ranging from low to medium. Quark is usually sold in plastic tubs with most or all of the whey. The flavor is reminiscent of sour cream with the seasonings of herbs, spices or fruits. The cheese makes a great base for many recipes such as cheesecake, pastas, creamy sauces, sandwiches, salads and desserts. 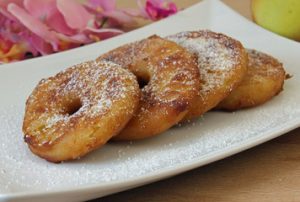 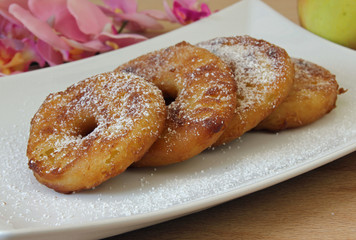 The Apfelküchle is a traditional German pastry made of sliced apples dipped in batter and fried to a golden brown color. It is popular in Baden-Württemberg. The Apfelküchle has spread throughout Europe and the USA. It is similar to an apple fritter but is made more like a pancake and can be prepared in numerous different ways. While it is traditionally eaten as a complete meal, because of its sweet taste, it has become popular to eat Apfelküchle as a dessert as well.

Apfelküchle are often served with vanilla sauce but only with sugar and cinnamon is fine too. They can also be served with Rote Grütze – delicious red fruit jelly.

For the vanilla sauce: 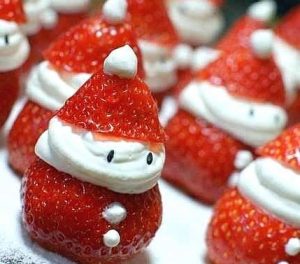 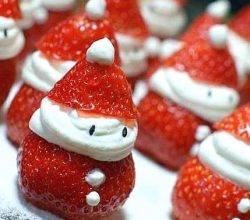 Rinse strawberries and cut around the top of the strawberry. You want to cut just enough to make the hat with.
Clean out the whole strawberry with a paring knife, if necessary (some of them are hollow already. Prep all of the strawberries and set aside.
In a mixing bowl, beat cream cheese, powdered sugar, and vanilla until creamy. Add cream cheese mix to a piping bag or Ziploc with the corner snipped off. Fill the strawberries with cheesecake mixture.
Once strawberries are filled, top with the ‘hats.’ Decorate according to photos or your own imagination.
If not serving immediately, refrigerate until serving. Serve on decorative plate with sugar “snow”. 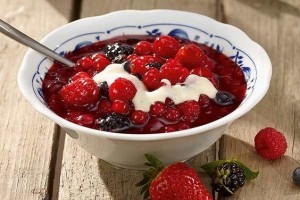 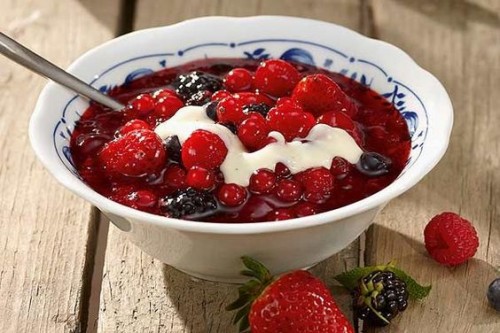 This refreshing summer dessert takes advantage of the cherry and berry season. Rote Grütze is a popular specialty from Northern Germany and has a lovely tart flavor. Serve with vanilla custard, cream or vanilla ice-cream. 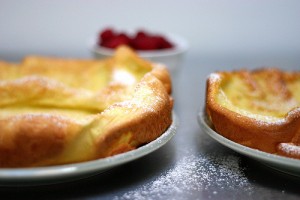 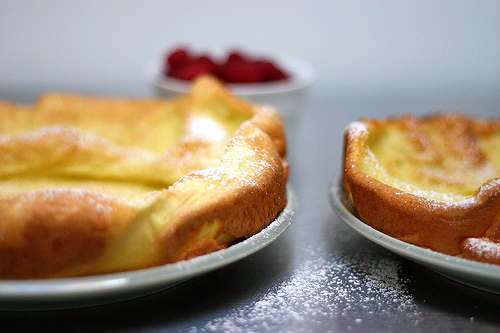 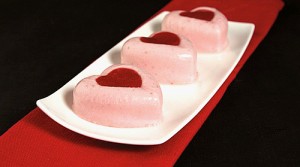 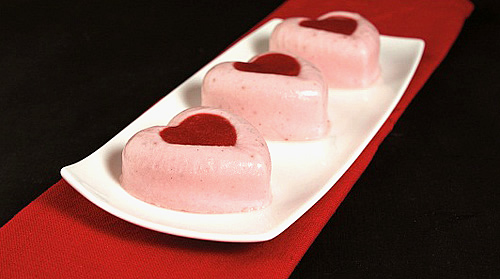 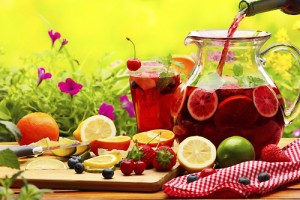 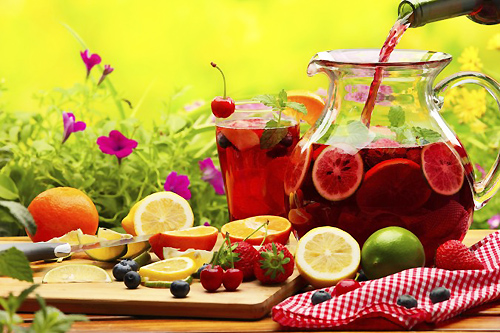 2. When ice is hardened, place one cranberry in each of the cubes and fill the remainder of the cube with more grape juice. Freeze.

3. In a large jar (sun tea jar is perfect), combine vodka with other fruit and sugar and place in refrigerator. Chill all other ingredients.

4. The day of the event, fill the punch bowl with the cranberry and apple juice. Slowly add the vodka and fruit mix followed by the champagne.

5. For presentation, tear the petals off the carnations and sprinkle atop the punch. Carnations are edible.