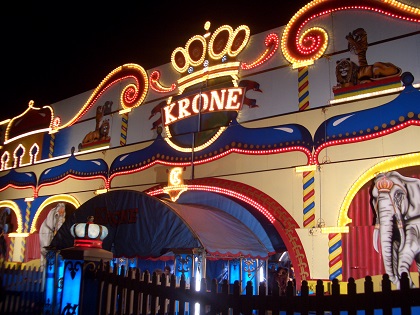 Greatest, best, most popular… Truly, Circus Krone deserves to live in its own world consisting of the superlatives. Raised by the legendary Circus King Carl Krone and respecting the old family traditions, this circus institution has been functioning ever since the premiere in Bremen in 1905. It has long ago become the largest circus in Europe, recognized and adored worldwide. Thus, it is another bright star on the German calling card.

Circus Krone rich history dates back to the end of the 19th century, when Carl Krone, Jr. started working in his father’s institution, Menagerie-theater. Gradually, Menagerie turned to Circus with its own building in Munich, celebrating the 80th birthday this year. Circus Krone presents the largest marquee in the world: 30.000 square meters of size, with 400 inhabitants, 250 animals, 330 wagons for living and the transportation of luggage and equipment. Tremendous sums of money have been invested in the Circus. The shows are visited by more than 1.2 million spectators each year, with many prominent persons among them.

Heart of the Circus Krone lies in its artistes and animals. 40 artistes, acrobats, animal trainers, dancers and clowns make the circus shows entertaining and unforgettable. One can even get in touch with them via email (addresses are given on the artistes’ personal pages). Animals are the most precious thing of the Circus. They are those who constantly draw attention to the shows. Still, Circus Krone states that it “doesn’t live OF but WITH its animals – and primarily FOR its animals”. Indeed, care about animals amazes and leaves no space for doubts as for their well-being.

From April, 1st to November, 14th Europe’s greatest Circus is visiting more than 30 cities in Germany and Austria. The Krone Parade show was created by Christel Sembach-Krone, directing and managing the Circus Krone since many years. Along with tour shows, Circus Krone gives performances in their solid building in Munich. Spectators can visit summer and winter productions. What makes people personally go to the shows while it is possible to watch them on TV? The point is that TV shows are unable to convey to the full extent the exciting feeling of the slight danger of wild animals’ presence, or suspense during the acrobats’ stunts. Circus Krone invites you to come and inhale the glamorous atmosphere of their superb shows, professional performance of artistes and animals.