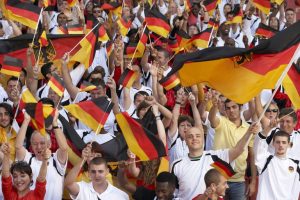 Germans are said to be rather serious, dour, and even humorless. While this is not entirely true, German people do indeed need some time to warm up and keep a polite distance when dealing with strangers. While it might be customary in some countries to address people by their first name, Germans like to stick to formalities. At the same time, their blunt direct way of communicating might put some people off and even appear rude. On the upside, once you’ve cracked a German’s hard shell, they will warm up quickly. This is also when you will find out that Germans are indeed funny and like to joke around a lot. Compliments are given rarely, but if so, then they are sincere.

Our gestures, facial expressions and voice tone say a lot more about us that the actual words we are saying. In Germany, lots of physical distance and a calm, moderate tome are appropriate in most situations. Hugging another person, patting their back, kissing their cheek and generally touching another person is reserved for close friends and relatives. Yelling, screaming and shouting are considered incredibly rude. That being said, Germans do talk with a blunt directness that may sound arrogant to other people. Such frankness and assertiveness are perfectly normal most of the time. It is not intended to offend you.

When it comes to small talk, Germans rarely chat about personal matters at first. Instead, they focus on sports, traveling, movies or cooking. You should avoid potentially controversial topics like politics or religion, reserving them for good friends only. Allusions to the country’s Nazi past and its role in the World Wars are taboo.

One of the many clichés about Germany and the Germans says that they act in a not very friendly or even rude manner towards strangers. But what is often interpreted as rude manners, is more like a basic inability of Germans to small talk – they simply are not used to it.

In fact, it comes more from another behavior often observed on Germans: They are said to be very direct and trying to be effective in what they are doing – that’s why most of them don’t think it is necessary to small talk as it costs time without producing measurable results. For them, it’s simply a waste of time. Next time you are trying to small talk with a German just say to yourself: They’re not rude, they’re just effective.

It’s said that it’s not too easy to make German friends, but once you’ve managed to befriend one, he or she will be a “real” and loyal friend. I don’t need to tell you that not all Germans are the same and especially young people are very open towards foreigners. It might be due to the fact that they are able to communicate better in English than the older Germans. It is more a basic cultural difference that becomes obvious in daily situations with strangers.