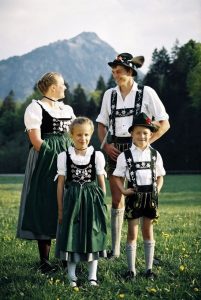 Every region in the world is easily identifiable by the kind of clothing that was traditionally worn there. From the ‘kimonos’ worn in Japan to the ‘sarees’ draped in India, from the ‘kilts’ of Scotland to the ‘pueblas’ of Mexico, these outfits were, and still are, synonymous with the culture of the country. Clothing that was traditionally worn in Germany is no different. The clothes that men and women wore traditionally tell us a lot about the country and its culture.

In earlier times, each ‘tracht’ identified a person as belonging to a particular group in terms of social and legal status (married, single), origin or trade. Today, the term is used to describe any garment reminiscent of the attire of rural communities. Regional varieties vary greatly. 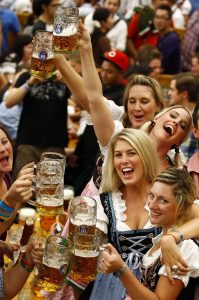 If you’ve been to Oktoberfest, which is celebrated all over the world, you are familiar with lederhosen and dirndls. Lederhosen, which means “leather trousers” in German, are the short leather pants worn by men. These are usually knee-length and are the historically worn by working-class German men with rustic shoes and wool socks. Lederhosen worn in the Bavarian region had features such as suspenders and front flaps, and these were quickly adopted by other countries. These pants were worn with shirts and sweaters made of coarse linen or wool. Other clothes teamed with the pants were wool stockings and country shoes. Jackets and hats vary according to region and occasion.

The dirndl is a ruffled apron dress worn by German women that consists of a bodice, or blouse, and a skirt. In the 19th century, the dirndl was the standard uniform of servant girls, but today it is mostly worn in Bavaria and Austria, and like lederhosen, usually for celebration. Each of these garments is a type of tracht, which historically was used to help identify people as members of a certain status (social, political or otherwise). Wealthy women in Bavaria and throughout the Alps had dirndls made of silk and other fine materials and wore them to church, weddings, funerals and other community events to show how in touch with the common people they were. Unwittingly, these appropriating ladies saved one of the most flattering garments ever constructed. 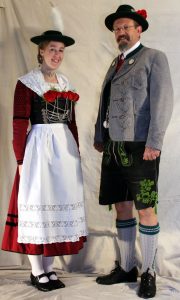 As for comfort, the dirndl is basically the yoga pants of years gone by. Intended to be worn for difficult labor, the outfit was often made from easily washable and breathable material like cotton, and without a corset or hoops.

In the last 10 years, the dirndl has undergone a sort of renaissance. It is not uncommon in Bavaria to see young women wearing one on the weekend, to a wedding or to family birthday party. Modern material and patterns and a whole slew of new, young dirndl designers are breathing new life into the garment yet again.

Hats are often costly and elaborate. They vary according to occasion and region: ‘Goldhauben’ (Upper Austria) and ‘Bollenhut’ (Black Forest region, Germany) are only worn on festive occasions. 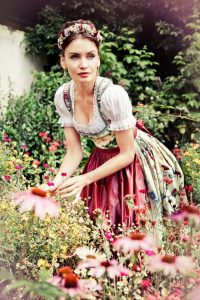 In many regions, especially Southern Germany, Bavaria and Austria, it is still acceptable to wear ‘tracht’ on official occasions like weddings, festivals, etc. Contemporary fashion adapts to traditional elements, the production of dirndl and lederhosen is a thriving industry in Germany.

There are many societies dedicated to ‘tracht’ revivals. Often, those efforts coincide with an interest in traditional crafts, like porcelain, glass-making or wood carving.

Related Articles:
A Glimpse from the Past: Traditional Bavarian Clothing