Each country has its own set of cultural values making it special: language, cuisine, traditions, etc. Dress is also a national peculiarity. Speaking of Germany, Bavaria in particular, a Dirndl dress and Lederhosen are the typical traditional pieces of clothing. 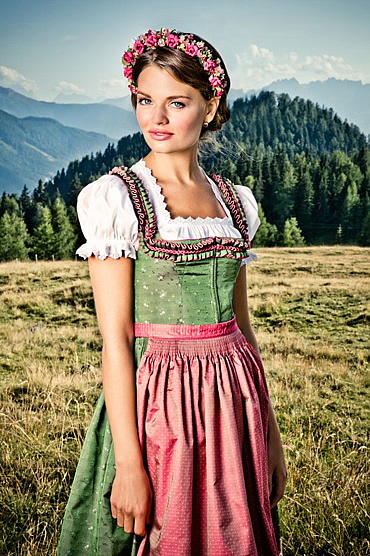 Until the 16th century, farmers and people of the lower classes used to wear gray or brown-colored garments. No other colors were worn at that time except for the blue. Blue-colored clothes were allowed only on Sundays and holidays. Since the 16th century, two types of traditional country dress developed: work clothes and Sunday/festive dress.

The best examples of these styles are native dress (Tracht) and folk-style dress (Dirndl). A dirndl is a type of traditional dress worn in Germany – especially Bavaria – Switzerland, Liechtenstein, Austria and South Tyrol, based on the historical costume of Alpine peasants. The dirndl consists of a bodice, blouse, full skirt and apron. The dirndl originated as a more hardy form of the costume worn today; the uniform of Austrian servants in the 19th century (Dirndlgewand means “maid’s dress”). Simple forms were also worn commonly by working women in plain colors or a simple check. 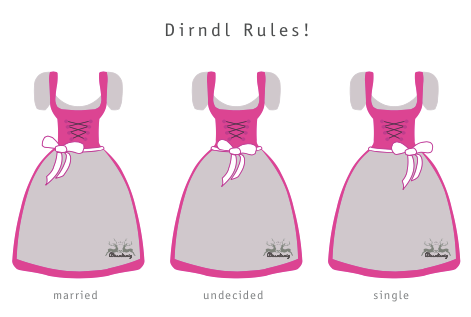 Tracht is a traditional national costume in German-speaking countries. Although the word is most often associated with Austrian and Bavarian costumes, many other peoples of Germany have them. Originally, the word “Tracht” had a much wider meaning in German in the sense of “what is carried/worn/borne”, as it is connected to the verb “tragen”, meaning “to carry/wear/bear”. So “Tracht” can refer to the clothes which are worn, but e.g. also simply to a load, which is carried (still used by beekeepers, referring to the load of honey carried in by the bees), or within the German idiom “eine Tracht Prügel” (a load (of) beating) to “a good beating”.

There are certain differences between Tracht and Dirndl. Here they are:

By the middle of the 19th century, when the industrial revolution took place, the native dress with its specific means of production and only natural materials began to disappear. Instead, the factory-made fabrics entered the life and conquered the market of clothes due to its reasonable price. In the end of the 19th century, native dress came back to life with a new wave of popularity and national consciousness. Native dress was the main symbol of ethnic identity, and folk tradition movements made it their target to revive the national clothing and save it from total disappearing. For that “Volkstrachtenvereine” – “Native Dress Societies” – were created and quickly spread. As a result, thousands of different costumes have been preserved or rescued from oblivion.

Nowadays dirndls are quite popular in Germany and Austria because they are pretty, fun, and not expensive as the native dress!