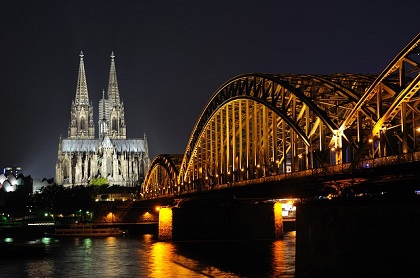 Construction on the Gothic cathedral in Cologne is begun. The cathedral would not be finished until the 19th century on August 14, 1880.

Construction of Cologne Cathedral commenced in 1248 and was halted in 1473, leaving it unfinished. Work restarted in the 19th century and was completed, to the original plan, in 1880. It is 144.5 m (474 ft) long, 86.5 m (284 ft) wide and its towers are approximately 157 m (515 ft) tall. The cathedral is the largest Gothic church in Northern Europe and has the second-tallest spires (after Ulm Minster). Its two huge spires give it the largest façade of any church in the world.

The cathedral, being very near to central railway station, suffered fourteen hits by aerial bombs during World War II. It did not collapse, but remained standing in an otherwise flattened city. The great twin spires are said to have been used as an easily recognizable navigational landmark by Allied aircraft raiding deeper into Germany in the later years of the war, which may be a reason that the cathedral was not destroyed. 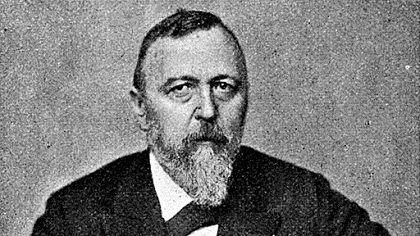 Birth of Richard Freiherr von Krafft-Ebing in Mannheim, Germany. Krafft-Ebing was one of the early researchers in sexual aberrations. He was a professor of psychiatry at the University of Strasbourg.

Death of the philosopher, Johann Friedrich Herbart, in Göttingen, Germany. Herbart is one of the founders of the modern science of pedagogy. He studied under Fichte at the University of Jena and while working in Interlaken, Switzerland, became a friend of Pestalozzi. In 1808 he was appointed to a chair of philosophy at the University of Königsberg as Kant’s successor. In philosophy he was interested in the philosophy of the mind. He developed a perception of the mind as a collection of a series of sensory units he called “Vorstellungen”. His two primary works on education are Pestalozzis Idee eines A B C der Anschauung (1802) and Allgemeine Pädagogik (1806). In the latter he developed a 5-step approach to learning. 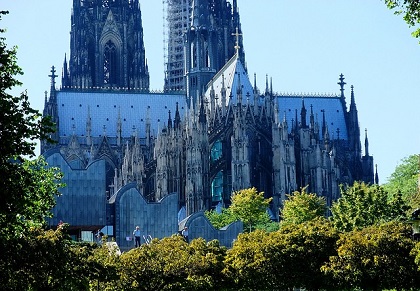 The Cologne Cathedral is declared completed.

Birth of Richard R. Ernst in Winterthur, Switzerland. Ernst won the Nobel Prize for Chemistry in 1991 for his work on nuclear magnetic resonance spectroscopy. He worked as a research chemist at Palo Alto, California, in 1963-1968 and then returned to Switzerland as a teacher in Zürich.

Death of Saint Maksymilian Kolbe. Kolbe was a Polish Franciscan priest who was active in the anti-Nazi Polish underground. He was arrested and sent to Auschwitz where he offered to be killed in the place of one of the prisoners. He was the first victim of the death camps to be beatified by the Roman Catholic Church. He was declared a saint and martyr in 1982.

The first post-war German parliamentary elections take place. The CDU/CSU gets 31% of the vote, the SPD 29.2%, the FDP 11,9%. A coalition government is formed consisting of the CDU, CSU and FDP.

Death of Hugo Eckener in Friedrichshafen, Germany. It was Eckener who commanded the dirigible Graf Zeppelin on its around-the-world flight in 1929 and a number of other spectacular flights. Out of favor with the Nazi government, he had been relieved of command just prior to the 1937 disaster in Lakehurst, New Jersey. 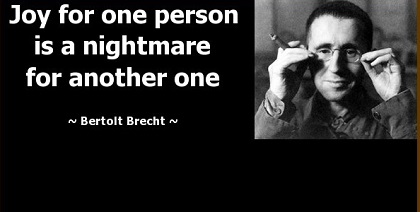 Death of Bertolt Brecht in Augsburg, Germany. Brecht was among the best of the German Marxist playwrights. His plays include Baal (1923), andTrommeln in der Nacht (1922). With musician, Kurt Weill, he wrote Die Dreigroschenoper (1928) and Aufstieg und fall der Stadt Mahagonny (1930). He fled the Nazis, living in Scandinavia and then the United states where he lived and worked in California. During the war he wrote Mutter Courage und ihre Kinder (1941), Leben des Galilei (1943), and Der gute Mensch von Sezuan (1943). In 1947 he was required to appear before Joseph McCarthy’s House Committee on Un-American Activities to answer questions about his alleged communist affiliations. He left the United States immediately thereafter. He lived for a short time in Switzerland and then emigrated into East Germany where he founded his own theater, Der Berliner Ensemble. He wrote Der Kaukasische Kreidekreis (1948) and Der Aufhaltsame Aufstieg des Arturo Ui (1957). In addition to his plays, Brecht was a preeminent theoretician, developing the concepts of alienation effects and epic theater.