Death of Rudolf I in Limburg-im-Breisgau, Germany. Rudolf was the first King of the Germans from the Habsburg dynasty. He was elected German king in Frankfurt am Main and crowned at Aachen on October 24, 1273. Pope Gregory X recognized the position only on the conditions that he would renounce any rights in Italy and lead a crusade.

Poland and Lithuania defeat the Teutonic Knights at the Battle of Tannenberg. The Teutonic Knights was an order of Christian knights founded to spread and/or protect Christianity through military means. The full name of the order was, Haus der Ritter des Hospitals sankt Marien der Deutschen zu Jerusalem. They wore a white uniform with a black cross. In a very limited form the order still exists in Vienna, although the military aspect of the order has been gone for centuries.

Death of Bl. Bernhard von Baden (1428-1458). Bernhard von Baden was born near Baden-Baden, Germany in 1428. He was the margrave (Markgraf) of Baden but gave up his rights to lead a life dedicated to the church. He gave of his energy to initiate a crusade. A number of miracles were reported worked at his grave after his death. He was beatified in 1769 and the process of canonization was initiated in 1958.

Birth of August Gottlieb Spangenberg in Klettenberg-Hohenstein, Germany. A Pietist theologian. Rejected in Germany, he went to the United States and founded the North American branch of the religious movement, Unitas Fratrum. 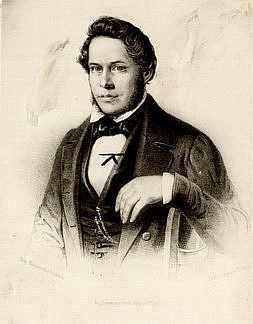 Birth of Friedrich Henle in Fürth. Henle was an anatomist and pathologist, a teacher of Robert Koch. Henle published the theory that diseases were caused by living microscopic organisms. Henle was a professor at the University of Göttingen. One of Henle‘s most profound achievements was to establish microscopic anatomy into the curriculum of every medical student. His research focused on epithelium and its derivatives. He identified the endothelial layer in blood vessels, analysed the loop system in the kidney and described the root sheath of hair, which is important for its regeneration.

Death of Carl Czerny in Vienna, Austria. Czerny was a pianist, teacher and composer. His pedagogical works are still widely used in piano instruction. He composed over 1,000 works.

The assembly of abstaining Germans began in Altona. Out of this assembly grew the Allgemeine Deutsche Zentralverband zur Bekämpfung des Alkoholismus (General German Central Association for the Fight against Alcoholism.)

The library of the University of Göttingen buys the manuscript of Gottfried August Bürger’s Lenore for 5,000 marks. The manuscript was purchased from a book dealer in Prague. 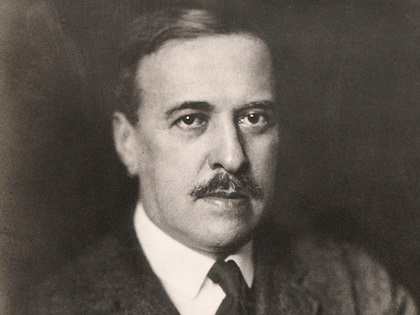 Death of Hugo von Hofmannsthal in Vienna, Austria. Hofmannsthal was a poet and dramatist who gained his greatest international note through his collaborations with the composer, Richard Strauss. Hofmannsthal wrote the texts to Elektra (1903), Der Rosenkavalier (1911), Ariadne auf Naxos (1912), and Arabella (1933). Other works by Hofmannsthal include Der Tor und der Tod (1893), Jedermann (1911), and Dasw Salzburger grosse Welttheater (1922). Hofmannsthal died of a heart attack brought on by distress after the suicide of his son Franz.

Death of Eugen Bleuler in Zollikon, Switzerland. Bleuler, a Swiss psychiatrist, introduced the term “schizophrenia” into the vocabulary of psychiatry (1908). He also introduced the concept of “autism”. He and his one-time assistant, Carl Jung, worked for a time with Sigmund Freud.

The Czech government announces that starting immediately 12,000 ethnic Germans per day will be removed to Germany. 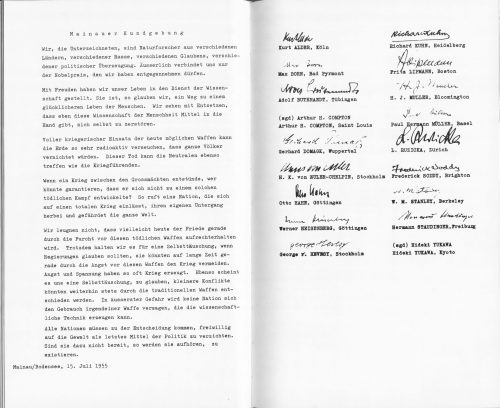 Mainauer Kundgebung, meeting on an island in the Bodensee (Lake of Constance) takes place where 18 Nobel Prize winners including the Germans Otto Hahn and Werner Heisenberg sign an appeal to world governments, warning of the dangers of atomic war.

Death of Ernest Bloch in Portland, Oregon (born in Geneva, Switzerland). The musician immigrated to America. He is noted for post-romantic traditions and Jewish cultural and liturgical themes.