Death of St. Heribert von Köln. Heribert von Köln was born in Worms in ca. 970 and educated at the cathedral school in Worms. He was ordained a priest in 994. In 999 he was named Archbishop of Cologne by the emperor Otto III. He was confirmed in that position by the Pope Sylvester II. (In the Holy Roman Empire a.k.a. the German Empire there was a shared authority over the appointment of bishops.) In 1003 he founded a monastery in Deutz. (He is said to have been instructed to do so in a vision.) Heribert died on March 16, 1021. He was buried in Deutz near the monastery he founded. His golden shrine is located today in the church of St. Heribert in Deutz (today a part of Cologne.) He was canonized in 1147 by Pope Gregory VII. His feast day is March 16. During his lifetime he was a close advisor to emperors of the Holy Roman Empire and made a number of trips to Rome. Already during his lifetime miracles were attributed to him. He had been honored as a saint before his formal canonization. 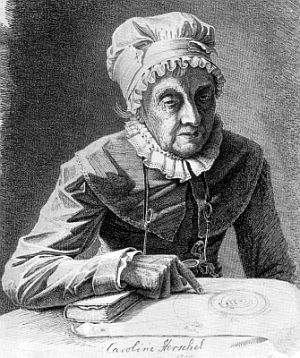 Birth of Caroline Lucretia Herschel in Hannover, Germany. Herschel was the sister of the astronomer Sir William Herschel. Some years after William had emigrated to England, he sent for her. Her early assignment was to keep house and to grind and polish mirrors for her brother. She soon began, however, to do much of the mathematical calculation of her brother’s work. After she had begun to do her own telescopic observations she discovered three nebulae and eight comets. In 1798 she completed a catalog of 560 stars missing in the British Catalogue. By 1822 she had completed a catalog of 2,500 nebulae and star clusters. She was given a gold medal by the British Astronomical Society. After her brother’s death she returned to Germany and continued her work there. 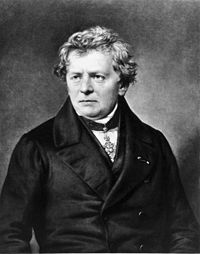 Birth of Georg Ohm (1789-1854) in Erlangen, Germany. Ohm was a physicist at the Jesuits’ College in Cologne and the Polytechnic School of Nürnberg. He discovered Ohm’s Law, the flow of an electric current through a conductor is directly proportional to the voltage and inversely proportional to the resistance. In electricity, the unit of resistance is named for him.

Birth of Karl Brugmann in Wiesbaden, Germany. Brugmann, a Neogrammarian, was a professor of comparative linguistics at the University of Leipzig. His Grundriss der vergleichenden Grammatik der indogermanischen Sprachen (1893, enlarged edition, 1916) remains the authoritarian grammar of Indo-European. 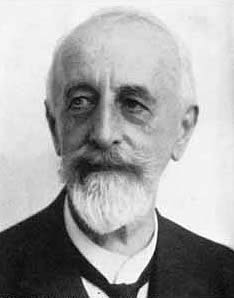 Birth of Heinrich Kayser (1853-1940) in Bingen, Germany. Kayser was a physicist, who, through spectral analysis, discovered helium in the atmosphere of the earth (1895). Prior to that scientists had detected helium only in the sun and in some minerals.

Birth of Clemens Graf von Galen in Dinklage, Germany. Galen was the Bishop of Münster during the period of Nazi domination. From the beginning he publicly criticized the party and on occasion complained directly to Hitler. In the early years he had some successes with his protests. On one occasion he even ignited a public demonstration. Documents found after the war indicate that the party was about to have him done away with, but wanted to wait until their victory in the war. Of course, the Nazi victory was never achieved and at the end of the war, in 1946, Galen was made a cardinal. Cardinal Galen died on March 22, 1946.

Death of August von Wassermann in Bamberg, Germany. Wassermann was the bacteriologist who discovered the blood-serum test for syphilis, the Wassermann test. He worked at the Robert Koch Institute of Infectious Diseases in Berlin.

Winston Churchill suggests that Germany rearm and contribute to its own defense.