The Teutonic Knights are established as a military order in a ceremony at Acre in Palestine. The order had been established originally in 1191 with the purpose of providing medical and spiritual attention to the sick and wounded Crusaders from Germany. The need for additional combatants, however, led to the decision to arm the lay members of the order and give them the designation of knight (Ritter).

Birth of Friedrich IV in Amberg, Germany. Friedrich, an ardent Protestant, was the elector of Rhineland-Pfalz. He actively opposed the Roman church and Habsburg leadership in the Holy Roman Empire. 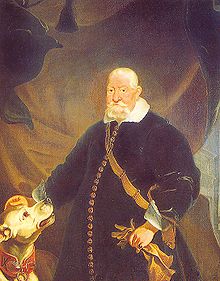 Birth of Johann Georg I in Dresden, Germany. Johann Georg was the very “laid-back” elector of Saxony during the period of the 30 Years’ War. In the midst of some of the greatest crises in Germany to that time, Johann Georg let it be known that his only real desire was “to drink his beer in peace”. Due to his lack of leadership Saxony lost its significant role in the Holy Roman Empire. 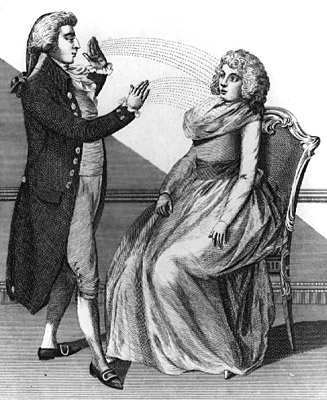 Death of Franz Anton Mesmer (1734-1815) in Meersburg, Germany. A physician, Mesmer developed the therapeutic system known as mesmerism and later hypnotism. He earned his medical degree at the University of Vienna in 1766. In addition he was much enchanted with the concept of “animal magnetism” (the flow of invisible fluids in the body), a theory which found wide-spread interest in those times. He practiced medicine with a variety of systems he developed. Viennese physicians, however, considered him a fraud and forced his departure from Vienna. He then practiced for a time in Paris, also with great popular following. The French physicians, however, also were suspicious and forced an investigation which declared him a fraud. The American diplomat Benjamin Franklin served on the commission investigating him.

Birth of Wilhelm von Giesebrecht in Berlin, Germany. Giesebrecht was a professor of history at the universities of Königsberg and Munich. A student of Leopold von Ranke, he wrote the first general history of Germany in the Middle Ages using modern critical historical methods.

Birth of Siegbert Tarrasch in Breslau, Germany (now in Poland). Tarrasch, a physician, was also a chess master. He is noted for his books on chess theory.

Birth of Michael von Faulhaber in Heidenfeld, Germany. Faulhaber, the Roman Catholic Cardinal of Munich and Freising, was one of those who resisted Hitler and the Nazis. His opposition to the Nazis started already at the time of Hitler’s attempted takeover of Munich in 1923. When Hitler came to power and through the War Faulhaber visibly opposed the Nazis. There were two attempts at assassination, but he survived. His sermons were critical of the Nazis and opposed their anti-Semitism, executions and medical experiments. After the war Faulhaber worked with the American occupation forces.

Birth of Karl Rahner in Freiburg, Germany. Rahner, a Jesuit priest, introduced existentialist elements into Thomistic philosophy. He was a professor of theology at the universities of Innsbruck, Munich and Münster. Noted books by Rahner include, Geist in Welt (1937), Sendung der Gnade (1966), Grundkurs des Glaubens (1976) and Über die Sakramente der Kirche (1974).

Death of Ludwig Quidde in Geneva, Switzerland (born in Bremen, Germany). Quidde was a leading pacifist during and after World War I. He was awarded the Nobel Prize for Peace in 1927. He was a member of the “German Peace Society from 1892. In 1894 he published a pamphlet entitled Caligula which was a thinly disguised attack on Kaiser Wilhelm II. For that he was arrested and imprisoned. From 1914 to 1929 he was the chairman of the “German Peace Society”. After the war he actively opposed the German war-guild section of the Versailles Treaty. He was the chairman of the “German Peace Cartel from 1921-1929. He was arrested again in 1924 for his pacifist writings. When the Nazis came to power in 1933, he immigrated to Switzerland where he died in 1941.

The U.S. puts its “Denazification Program” under the control of German authorities. The denazification was an extensive program designed to remove the ideas and images the Nazis had implanted in the minds of German citizens during their tenure of power through their pervasive propaganda program.

Winston Churchill gives his “iron curtain” speech in the U.S.A. In that speech he referred to the increasing isolation of Eastern Europe as being as if an “iron curtain” had been brought down through the center of Europe. The term became a part of everyday English for the next 50 years.

On this date a Four Power Conference on the “German Question” ended with no agreements after 73 sessions.