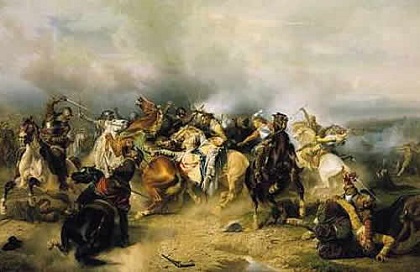 Germany enjoyed a time of relative quiet between the Peace of Augsburg, signed in 1555, and the outbreak of the Thirty Years’ War in 1618. The empire functioned in a more regular way than previously, and its federal nature was more evident than in the past. The Reichstag met frequently to deal with public matters, and the emperors Ferdinand I (r. 1556-64) and Maximilian II (r. 1564-76) were cautious rulers concerned mostly with strengthening their family’s hold on Austria and adjacent areas. Rudolf II (r. 1576-1612) was an indolent and capricious ruler who generally followed his advisers’ counsel. As a result, some German states were able to expand their territories by annexing smaller neighbors in the absence of an engaged and attentive emperor. Local rivalries engendered tensions that often were based on religious affiliation.

Like many wars of its time period, the 30 Years’ War had its root in politics and religion. From the religious point of view, this war was the Catholic attempt to overcome Protestantism. On the political side, it was the Habsburg Dynasty’s attempt to keep control while many other countries worked to rob them of it.

Related articles:
The Counter-Reformation
Military Campaigns
The Peace of Westphalia