Birth of Kaufmann Kohler in Fürth, Germany. Due to his revision of biblical interpretation he was shunned in the Jewish community in Germany and emigrated to the United States. In America he became one of the most influential theologian of Reform Judaism.

The Peace of Frankfurt ends the war of 1870-71 between France and Germany. 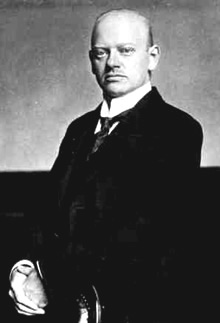 Birth of Gustav Stresemann in Berlin. Gustav Stresemann was a German politician and statesman who served as Chancellor in 1923 and Foreign Minister 1923–1929, during the Weimar Republic. He was co-laureate of the Nobel Peace Prize in 1926. His most notable achievement was the reconciliation between Germany and France, for which he and Aristide Briand received the Nobel Peace Prize. During a period of political instability and fragile, short-lived governments, he was generally seen as the most influential cabinet member in most of the Weimar Republic’s existence. During his political career, he represented three successive liberal parties; he was the dominant figure of the German People’s Party during the Weimar Republic.

Birth of Karl Barth in Basel, Switzerland. Barth was among the most influential theologians of the 20th Century. He initiated a new era in Protestant thought. Among Barth’s noted books are, Der Römerbrief, Offenbarung, Kirche, Theologie and Kirchliche Dogmatik.

Death of Karl Wilhelm von Nägeli in Munich, Germany (born in Kilchberg, Switzerland). Nägeli was a botanist who made his greatest contribution in the area of the structure and workings of plant cells. He was professor of botany at the universities of Zürich, Freiburg and Munich. He introduced the concept of meristem into botany, correctly described apical cells and advanced the understanding of cell division. 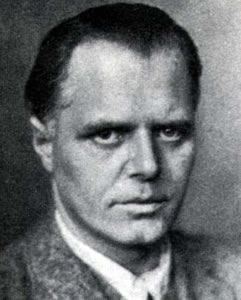 Birth of Fritz von Unruh, a German Expressionist dramatist, poet, and novelist, in Koblenz, Germany. A general’s son, he was an officer in the German army until 1912, when he left to pursue his writing career. Two of his earliest important works, the play Offiziere (“Officers”; 1911) and the poem Vor der Entscheidung (“Before the Decision”; 1914) established his anti-war beliefs and his belief that the social order must be based not on authority, but on the integrity and responsibility of the individual towards humanity. Unruh’s works were anti-militaristic and called for world peace and brotherhood. Unruh was a staunch opponent of the Nazi Party and wrote several works warning of the consequences of Nazi dictatorship, including Bonaparte (1927), Berlin in Monte Carlo (1931), and Zero (1932).

German submarine warfare is now sinking over 875 tons of British shipping per month. Estimates are that Britain will be forced to sue for peace within 5 months due to lack of essential supplies. On May 10 a convey system is put into effect over the objections of conservative naval men who see it as a waste of military power. It is very effective and the German blockade is effectively broken.

Book burning at the Opera Square in Berlin by the SA. 20,000 books burned.

Initiation of “Blitzkrieg” on France, Belgium and Holland.

Rudolf Hess, Hitler’s deputy Führer, flies alone in a small plane to England where he landed by parachute. He had the wild idea that he could convince Churchill to withdraw from the war or even support Germany, if only he could speak with him. Hitler denounced him and Churchill ignored him.

Bonn is selected as the temporary capital of West Germany.

Joschka Fischer is awarded the Leo Baeck Prize given by the Central Council of Jews in Germany for his efforts toward seeking understanding and reduction of tensions in the Middle East. 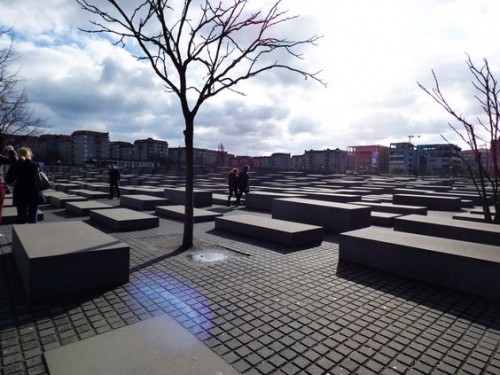 The Holocaust Memorial in Berlin is opened. The Memorial to the Murdered Jews of Europe, also known as the Holocaust Memorial, is a memorial in Berlin to the Jewish victims of the Holocaust, designed by architect Peter Eisenman and engineer Buro Happold. It consists of a 19,000 sq.m. site covered with 2,711 concrete slabs or “stelae”, arranged in a grid pattern on a sloping field. The stelae are 2.38 m long, 0.95 m wide and vary in height from 0.2 to 4.7 m. They are organized in rows, 54 of them going north–south, and 87 heading east–west at right angles but set slightly askew. An attached underground “Place of Information” holds the names of approximately 3 million Jewish Holocaust victims, obtained from the Israeli museum Yad Vashem.

Building began on April 1, 2003, and was finished on December 15, 2004. It was inaugurated on May 10, 2005, sixty years after the end of World War II, and opened to the public two days later. It is located one block south of the Brandenburg Gate, in the Friedrichstadt neighborhood.