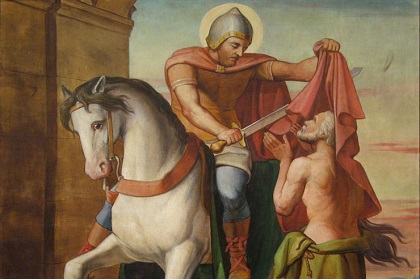 This festival was originally celebrated in memory of St Martin of Tours (b. 316 AD) and marked the 40 day fasting period before Christmas. When the fasting period was made shorter and renamed Advent (see below), the tradition came to be associated with Martin Luther, who was born on this day in 1546. Nowadays, it’s seen more as a celebration of the goose by making a wonderful roast goose.

Birth of Holy Roman emperor Heinrich IV in Saxony. Heinrich became the German King in 1054 (at the age of 4) and the Holy Roman Emperor in 1084. His reign was marked by a heated struggle with Pope Gregory VII on the question of lay investiture. Heinrich was at one point excommunicated and forced to do penance at Canossa (1077).

Birth of Paracelsus (Philippus Aureolus Theophrastus Bombastus von Hohenheim) in Einsiedeln, Switzerland. Paracelsus was an alchemist and physician. He attended many universities seeking a great teacher, but in his words found mostly just “asses”. He took the name Paracelsus which means “beyond Celsus” in that he felt superior to the most famous Roman physician, Celsus. And indeed, he may have been correct. He became the most famous physician of his age with his wondrous cures and his university lectures. It seems Paracelsus had learned how to carry out cures with chemicals.

Birth of Albert VII in Wiener Neustadt, Austria. The son of the Holy Roman Emperor, Maximilian II, Albert served his uncle King Philip II of Spain. He was appointed archbishop and cardinal of Toledo, Spain in 1577. He governed Portugal from 1581-1595. In 1595 he became the ruler of the Spanish Netherlands.

Birth of Johann Albert Fabricius in Leipzig, Germany. Fabricius was the leading bibliographer of his age, producing many volumes of bibliographies of the classics. 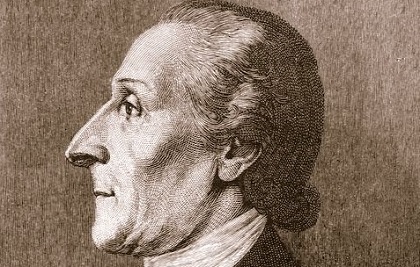 Birth of Johann Kaspar Lavater in Zurich, Switzerland. He founded “physiognomics” – a religious, anti-rational literary movement. He might well have been forgotten except that the genius of the age, Johann Wolfgang von Goethe, worked with him on the four-volume Physiognomische Fragmente zur Beforderung der Menschenkenntnis und Menschenliebe (1775-1778).

A major fire broke out in Immanuel Kant’s home town of Konigsberg. 369 houses, 49 warehouses and the Lobenicht church were destroyed. Professor Kant’s residence did not burn.

Birth of Alfred Hermann Fried in Vienna, Austria. A leading pacifist, Fried founded the periodical, Die Waffen Nieder, in 1891. In 1892 he founded the pacifist organization “Deutsche Friedensgesellschaft”. He fled to Switzerland at the start of WWI and worked for peace from there. 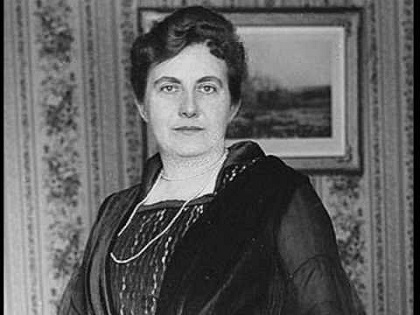 Birth of Elena Gerhardt in Leipzig, Germany. Trained at the Leipzig conservatory, she became the leading “Lieder” singer of her day. Her work with the music of Hugo Wolf was especially treasured.

Birth of Sam Spiegel in Jaroslau, Austria (now in Poland). Spiegel, after his studies at the University of Vienna, immigrated to the U.S.A. where he became a movie producer. Films by Spiegel include, On the Waterfront, The Bridge on the River Kwai, Suddenly Last Summer, Lawrence of Arabia, and the African Queen. Spiegel had been sent to Universal Pictures to head their studio in Berlin in 1930, but left in 1933 when the Nazis came to power.

The battle of Lodz begins in WWI. German forces attack the Russian armies. By November 25 Russian forces have halted the German advance but the Russian army has lost an estimated 100,000 troops and the planned Russian offensive has again been disrupted. 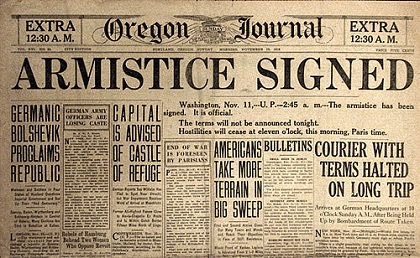 The armistice to end WWI is signed. On this date in a train car in Compiègne agreement is reached between German civilian negotiator Matthias Erzberger and a French representative Marshal Ferdinand Foch at 5:00 AM. Hostilities cease at 11:00 AM. The actual terms, largely written by Foch, included the cessation of hostilities, the withdrawal of German troops to behind their own borders, the preservation of infrastructure, the exchange of prisoners, a promise of reparations, the disposition of German warships and submarines, and conditions for prolonging or terminating the armistice.

Karl I, the last Emperor of the Austro-Hungarian Empire renounces participation in affairs of state, but not the title of Emperor. The Austrian parliament removed his title in 1919.

Death of Cardinal Felix von Hartmann of Cologne. The naming of a successor will be a test of the Vatican’s new canon law of 1917 which gave the Pope the direct authority to name a new archbishop whereas the naming of the archbishop of Cologne had traditionally been by election among the canons of the cathedral. Resisting instructions to wait, the canons of the cathedral select the bishop of Paderborn, Josef Schulte. Schulte will ultimately be accepted by the Vatican. He will later be named a cardinal.