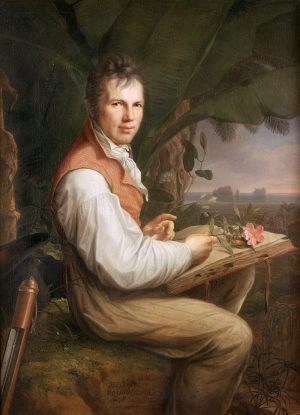 Alexander von Humboldt (born Sept. 14, 1769, Berlin—died May 6, 1859, Berlin), a German naturalist and explorer who was a major figure in the classical period of physical geography and biogeography—areas of science now included in the earth sciences and ecology. With his book Kosmos he made a valuable contribution to the popularization of science. The Humboldt Current off the west coast of South America was named after him.

Between 1799 and 1804, Humboldt travelled extensively in Latin America, exploring and describing it for the first time from a modern scientific point of view. His description of the journey was written up and published in an enormous set of volumes over 21 years. Humboldt was one of the first people to propose that the lands bordering the Atlantic Ocean were once joined (South America and Africa in particular). Humboldt resurrected the use of the word cosmos from the ancient Greek and assigned it to his multi-volume treatise, Kosmos, in which he sought to unify diverse branches of scientific knowledge and culture. This important work also motivated a holistic perception of the universe as one interacting entity. He was the first person to describe the phenomenon and cause of human-induced climate change, in 1800 and again in 1831, based on observations generated during his travels. 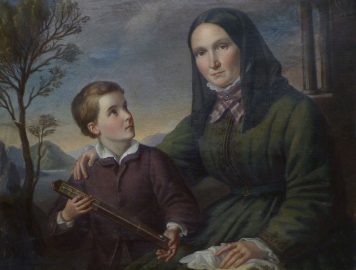 Humboldt as a boy with his widowed mother, Maria Elisabeth (Colomb) von Humboldt, 1780

Due to his youthful penchant for collecting and labeling plants, shells and insects, Alexander received the playful title of “the little apothecary”. Marked for a political career, Alexander studied finance for six months in 1787 at the University of Frankfurt (Oder), which his mother might have chosen less for its academic excellence as its closeness to their home in Berlin. On 25 April 1789 he matriculated at Göttingen, then known for the lectures of C. G. Heyne and anatomist J. F. Blumenbach.

At Göttingen he met Georg Forster, a naturalist who had been with Captain James Cook on his second voyage. Humboldt traveled with Forster in Europe. The two traveled to England, Humboldt’s first sea voyage, The Netherlands, and France. In England, he met Sir Joseph Banks, President of the Royal Society, who had traveled with Captain Cook. Banks showed Humboldt his huge herbarium, with specimens of the South Sea tropics. The scientific friendship between Banks and Humboldt lasted until Banks’s death in 1820, and the two shared botanical specimens for study. Banks also mobilized his scientific contacts in later years to aid Humboldt’s work.

A year spent at the University of Göttingen, from 1789 to 1790, finally opened the world of science to him; he became particularly interested in mineralogy and geology and decided to obtain a thorough training in these subjects by joining the School of Mines in Freiberg, Saxony, the first such establishment.

He left Freiberg in 1792 after two years of intensive study but without taking a degree. A month later he obtained an appointment in the Mining Department of the Prussian government and departed for the remote Fichtel Mountains in the Margraviate of Ansbach-Bayreuth, which had only recently come into the possession of the Prussian kings. Here Humboldt came into his own; he travelled untiringly from one mine to the next, reorganizing the partly deserted and totally neglected pits, which produced mainly gold and copper. He supervised all mining activities, invented a safety lamp, and established, with his own funds, a technical school for young miners. Yet he did not intend to make mining his career. 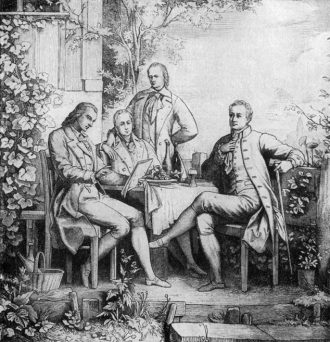 Schiller, Wilhelm and Alexander von Humboldt with Goethe in Jena, 1797

Humboldt’s researches into the vegetation of the mines of Freiberg led to the publication in Latin (1793) of his Florae Fribergensis, accedunt Aphorismi ex Doctrina, Physiologiae Chemicae Plantarum, which was a compendium of his botantical researches. That publication brought him to the attention of Johann Wolfgang von Goethe, who had met Humboldt at the family home when Alexander was a boy, but Goethe was now interested in meeting the young scientist in order to discuss metamorphism of plants. An introduction was arranged by Humboldt’s brother who lived in the university town of Jena, not far from Goethe. Goethe had developed his own extensive theories on comparative anatomy. Working before Darwin, he believed that animals had an internal force, an urform, that gave them a basic shape and then they were further adapted to their environment by an external force. Humboldt urged him to publish his theories. Together the two discussed and expanded these ideas. Goethe and Humboldt soon became close friends.

Humboldt’s mother died when he was 27, in 1796, and this left him a good inheritance which would pay for his future explorations. A year after his mother’s death, he left government service and planned his travels with the botanist Aime Bonpland. Humboldt had always wanted to travel and explore and he seized his chance. Together with Bonpland, they traveled to Madrid to obtain the special permission needed at that time to explore South America.

Humboldt and his fellow scientist Aimé Bonpland at the foot of the Chimborazo volcano, painting by Friedrich Georg Weitsch, 1810

On the 5th of June 1799 Bonpland and Humboldt finally set sail aboard the ship Pizarro. They had a 6-day stop at Tenerife, where they explored the Teide volcano. On the 16th of July, they landed at Cumana, Venezuela. During their stay in South America, Bonpland and Humboldt studied the topography, flora, and fauna of the continent. Bonpland and Humboldt continued their explorations of South America and they took a trip to the Andes, climbing to the top of Mt. Chimborazo, located in today’s modern Ecuador. At that time, this summit was believed to be the highest peak in the world.

While on South America’s west coast, Humboldt discovered and measured the Peruvian Current. This current is also now known as the Humboldt Current.

Other notable experiences from his explorations in South America included being able to see an amazing meteor shower the “Leonids” on the nights of November 11 and 12 shortly after their arrival. Humboldt was the first person to connect altitude sickness to a lack of oxygen, due to his many mountain climbs and his own personnel experiences at high altitudes. Bonpland and Humboldt captured and dissected electric eels from which they received a number of electric shocks themselves. 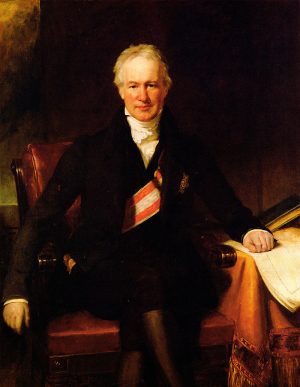 Eventually the fortune from his mother’s inheritance ran out. Humboldt then found a stable source of income and became one of the advisors of Prussia’s King. He was invited to Russia in 1829 and on his extensive journey found diamonds in the gold mines of the Urals and collected data for an isothermal world map.

In 1827, Humboldt visited in Berlin, giving public lectures. These lectures became so popular that he decided to write all his research in a work which he called the “Kosmos”. The first volume was published in 1845 when he was 76 years old. Five volumes in total were published, the final volume posthumously.

Humboldt suffered a minor stroke on February 24, 1857. Two years later, his health began to decline and at the age of 89, he died on May 6, 1859. To this day, he is known as one of the most significant contributors to the earth sciences.