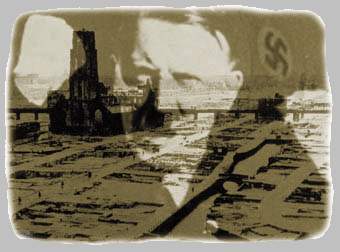 Nationalism is an infantile idea.
It is a measles of mankind.
—Albert Einstein

The stars must have been in a special position above the Austrian town Braunau on April 20, 1889, when Adolf Hitler was born. Neither his father Alois Schickelgruber Hitler whom Adolf hated, nor his mother Klara Poelzl whom he, to the contrary, adored, could foresee their son’s future. A touchy, difficult child who Adolf was in his young years, he didn’t do well at school. His dream was to become a painter which did not come true because he was rejected by Academy of Fine Arts in Vienna. During that hard time Hitler earned his humble living by selling his drawings. It was in Vienna that Hitler got his first education in politics by studying the demagogic techniques of  Karl Lueger, and picked up the obsessive idea of antisemitism and concern with the ‘purity of blood’ that remained with him to the end of his career, and brought so much grief and tragedy into the lives of European Jewry.

In 1913 Hitler came to Munich where he volunteered for service in the German army and was accepted into the 16th Bavarian Reserve Infantry Regiment. For the bravery during his service Hitler was awarded the Iron Cross Second Class and First Class. In 1919 Hitler joined the German Workers’ Party, where he developed his exceptional oratory skills. Soon the name of the party was changed to the National Socialist German Workers Party (Nazi for short).

Adolf Hitler became chancellor of Germany in 1933 and quickly turned the nation’s fragile democracy into a one-party dictatorship. Police rounded up thousands of political opponents, detaining them without trial in concentration camps. The Nazi regime also put into practice racial policies that aimed to “purify” and strengthen the Germanic “Aryan” population. A relentless campaign began to exclude Germany’s one-half million Jews from all aspects of German life.

“Today Germany is ours, and tomorrow the whole world!”
Adolf Hitler

The Nazi movement was an ideological movement founded in 1919 and led by Adolf Hitler. Based on ideas of German racial superiority, it promoted territorial expansion, blamed the Jews for the ills of Germany and called for their removal from the German society. It gave rise to the Nazi Party, which came to power in 1933 and implemented its ideologies. The party’s platform of twenty five objectives, published in 1920, was formulated by Hitler and Anton Drexler and included militaristic, nationalistic, social, economic, and antisemitic clauses.

On November 8, 1923, Hitler and members of the Nazi Party attempted to violently overthrow the German government. This was known as the “Beer Hall Putsch”. Hitler was sentenced to five years in prison but only served nine months, during which he wrote Mein Kampf, his autobiographical sketch of Germany’s future under the Nazi regime.

Founded on January 5, 1919, the Nazi party had its origins in the Political Workers’ Circle, a small right-wing group that started its activity in November 1918 under the leadership of Anton Drexler. A fierce antisemitism characterized its meetings. In 1919, under Drexler, this circle became the German Workers’ Party. In November 1923 when the putsch under Hitler’s leadership was failed, the party was officially banned. However it was refounded in 1925, and remained in existence until after Germany’s defeat in World War II, when it was declared illegal by the Allies in September 1945.

After the Anschluss of Austria on March 13, 1938, nearly 200,000 Jews were added to the Reich. Hitler’s radical racial point of view was combined with a Social Darwinism that saw the Jew as a source of danger to Germany and humanity, and as a central factor in the dynamic development of hostile ideological trends such as democracy, liberalism, and socialism. Even the Christian sources of ethnic political thinking in Western society were perceived by Hitler as manifestations of the penetration of the Jewish spirit into western European civilization. On January 30, 1939, Hitler declared in the Reichstag that a new world war would lead to the destruction of the Jewish race in Europe. When the war began in Poland, on September 1, 1939, the Germans launched the destruction of Jews there, although for a while this was done occasionally rather than methodically.

It was also at about this time that the systematic killing of the mentally ill with toxic gas was undertaken, on Hitler’s orders. The systematic killing of Jews began after the German invasion of the Soviet Union on June 22, 1941. According to Hitler’s world view and his political strategy, the goal of the territorial expansion – to gain living space in the east – and the destruction of the Jewish people as the central ideological enemy were connected and were the focal point of the whole struggle. The first slaughters of Jews in the Soviet Union were started in June 1941; the killing was then extended to include the rest of the Jews of Europe. On several occasions Hitler reminded the public about his prophecy concerning the destruction of the Jews, and on April 2, 1945, he boasted that he had “exterminated the Jews of Germany and central Europe”. His political testament of April 29, 1945, ended with a call for “merciless resistance to the universal poisoner of all nations – international Jewry.” The following day he committed suicide in his own bunker in Berlin.