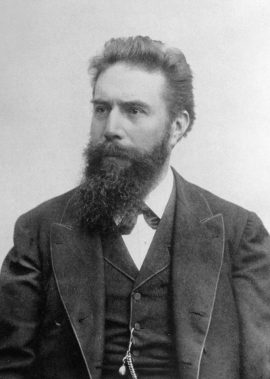 Wilhelm Conrad Röntgen (March 27, 1845 – Feb. 10, 1923) was a German physicist who was a recipient of the first Nobel Prize for Physics, in 1901, for his discovery of X-rays, which heralded the age of modern physics and revolutionized diagnostic medicine.

Röntgen studied at the Polytechnic in Zürich and then was professor of physics at the universities of Strasbourg (1876-79), Giessen (1879-88), Wurzburg (1888-1900), and Munich (1900-20). His research also included work on elasticity, capillary action of fluids, specific heats of gases, conduction of heat in crystals, absorption of heat by gases, and piezoelectricity.

In 1895, while experimenting with electric current flow in a partially evacuated glass tube (cathode-ray tube), Röntgen observed that a nearby piece of barium platinocyanide gave off light when the tube was in operation.

He theorized that when the cathode rays (electrons) struck the glass wall of the tube, some unknown radiation was formed that traveled across the room, struck the chemical, and caused the fluorescence.

Further investigation revealed that paper, wood, and aluminum, among other materials, are transparent to this new form of radiation. He found that it affected photographic plates, and, since it did not noticeably exhibit any properties of light, such as reflection or refraction, he mistakenly thought the rays were unrelated to light.

In view of its uncertain nature, he called the phenomenon X-radiation, though it also became known as Röntgen radiation.

He took the first X-ray photographs, of the interiors of metal objects and of the bones in his wife Anna Bertha’s hand. When she saw her skeleton, she exclaimed “I have seen my death!”

In 1901, Röntgen was awarded the first Nobel Prize in Physics. 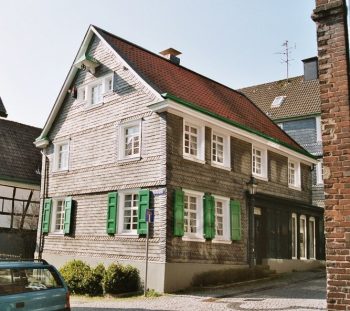 Birthplace of Roentgen in Remscheid-Lennep

The award was officially “in recognition of the extraordinary services he has rendered by the discovery of the remarkable rays subsequently named after him”. Röntgen donated the monetary reward from his Nobel Prize to his university. Like Pierre Curie, Röntgen refused to take out patents related to his discovery of X-rays, as he wanted society as a whole to benefit from practical applications of the phenomenon.

He inherited two million Reichsmarks after his father’s death. With the inflation following World War I, Röntgen fell into bankruptcy later in life, spending his final years at his country home at Weilheim, near Munich. Röntgen died on February 10, 1923 from carcinoma of the intestine. In keeping with his will, all his personal and scientific correspondence was destroyed upon his death.