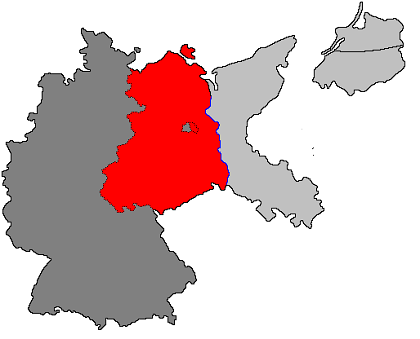 What is ‘East Germany’? This question arises not just from political background of the country, but historical, too. Postwar society used to name Soviet GDR as ‘East Germany’: lands of Prussia, Silesia and Pomerania belonged to former GDR and located in the east of the Oder.
Historically these lands were inhabited by Germans, but after the World War II the Germans were moved from their native lands. As a result ‘East Germany’ did not really mean ‘Eastern part of German lands’. It meant lands situated in the east from Germany (former FRG) where Polish and Russian people lived after the war. Such German natives resettlement was called ‘Federation of Expellees’ provided without people wishes and was due to Germany defeat in the World War II.

Time is the best judge which keeps truth and justice valid values. Germany was not an exception and in 1990 the Germany re-unification happened. This event has great value for Germans as the act of democracy and freedom in society. However, the former ‘East Germany’ lands inhabited by Russians and Polish from 1945 were lost. Such loss was the fair treatment to Russian and Polish people who did not want to leave their homes.

From the political viewpoint ‘East Germany’ does not exist anymore, but this article title can not be acceptable for Germans who are not politicians. They still use term ‘east’ for the lands in the East of Berlin and from their point of view ‘East Germany’ will never be removed from Germany map. Moreover, they will never forget Berlin Wall fall and will celebrate East Germany as their middle lands (for example, Saxony) for centuries.