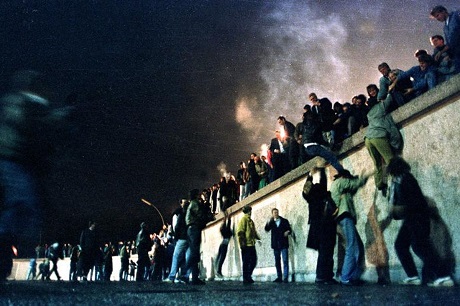 In the middle of the 1980s the Cold War started to melt, especially due to the changes in the Soviet government. Mikhail Gorbachev, the first and the only President of the USSR, started a new political wave called Perestroika, and made a friendly step towards the West acknowledging the dependence of the Soviet Union on the high technologies and financial help from the USA.
The first step towards freedom was made in May, 1989, when Hungary opened its borders to Austria, and thousands of East Germans applied for visas and arrived in Hungary. But because of the unbelievable flow of people it was impossible to let them all into Austria. No matter what, people made up their minds not to get back home, leave their past lives behind. Something had to be done.

Meanwhile, East Germany celebrated the 40th anniversary of the state foundation. There was a usual military parade with the authorities looking down on the military in a Soviet-like manner. Couple days later, people went out in the streets with the slogans “Freedom”, “No More Violence”, urging the others to join them. By October 16, the number of the demonstrators reached millions. What they demanded was the free access to the information, the right to disagree with the government, to travel, to discuss and influence the politics – the simple and necessary things to keep the people at home. Otherwise the nation would have no future.

East German government gave up. On November 9, 1989 the first train with East Germans left Hungary for the West. From then on there were no restrictions for West-bound Easterners. The Wall opened! The West welcomed the East. The people flowed into West Berlin through the open checkpoints, and gazed at the luxurious stores on the other side of the Wall, which have been there so close and yet so far during all those years. The euphoria was overall and unforgettable.

On November 11, 1989, the first gap in the Wall was made, to the cheering of the crowd. By Christmas the Wall was partially down, and the Brandenburg Gate was again the great historic monument of Berlin, and not the segment of the Wall.

On July 1, 1990, an economic, monetary and social union between East and West Germany was formed, and all restrictions
concerning travels were dropped. On October 3, 1990, less than a year after the collapse of the Berlin Wall, reunification of the two Germanys was a fact. The new Germany emerged – right in the heart of Europe with a great united German nation, and five new lands in its – Brandenburg, Mecklenburg, Saxony, Saxony-Anhalt, and Thuringia.

The hardships connected with the economical and political reforms taking place both in the East and in the West, cannot be underestimated. However the will for the co-existence and cooperation is so strong that no difficulties count.

Related article:
The Reunification of Germany and Its Aftermath
Ten Years Together: Bored or Happy?
Opening of the Berlin Wall and Unification