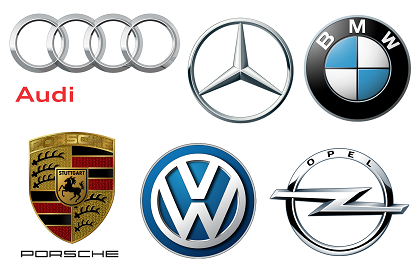 The cars are used so extensively nowadays, that they tend to turn into a separate cultural subcategory, especially where the German culture is concerned. The exteriors always define the first impression. That is why people purchase expensive vehicles, committing money rather to the brand image of a car than to the perfect technical devices, or luxurious interiors. The top positions in the lists of the most prestigious cars are fixedly occupied by German automobiles Mercedes-Benz, BMW, Volkswagen, and Audi. The first two target the most well-to-do people, and offer the first-rate but very costly select autos.

Audi, the elite subdivision of Volkswagen Group, prefers another tactic: its models, while offering a presentable appearance and excellent technical performance, compete with the other rivals on a single, but very important parameter – price.

Opel models are designed for middle-class population, especially for rational-minded people who will never rack their brains whether or not to buy BMW or Mercedes. They will simply buy Opel, bearing with the lack of comfort and… thinking about annual turnover.

The presentations of new Mercedes models turn into epoch-making events – like Moon shots, German reunification, or Ferrari’s victory in Formula-1 races, but they happen much more often. And each time it is a rattler. The history of Mercedes is rich. It started in 1899 with the first success of Emil Jellinek, an Austrian diplomat and a Daimler sales agent, at European races under the pseudonym “Mercedes” (Jellinek’s eldest daughter’s name). Soon Jellinek initiated production of a new Daimler model, and ventured to sell them marked as Mercedes in Europe and the USA. The idea was such a success that ever since 1902 all Daimler vehicles changed their name to Mercedes.

The world of cars, like that of humans, is complex and versatile. It includes all: losers and favorites, the plain and the beautiful. There are also aristocrats. Sure, the last category is represented by BMW models of 3 series, 5 series, 7 series. The cars produced in Bayern have no need for worldwide advertising campaigns, nor for pompous presentations. The superb quality shows through the tight rows of worthy competitors like Audi, Jaguar, and Mercedes.