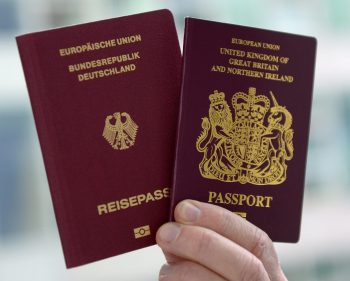 While most nationalities must denounce their nationality in order to get German citizenship, German law permits certain people to hold two citizenships in certain circumstances.

German dual citizenship can be granted in the following situations:

Even if you hold German dual citizenship, you are still wholly viewed as a German citizen by German law and have the same rights as any German citizen. However, if you chose to live in your home country (or any country where you hold citizenship) you will lose your right to claim German consular protection; instead, you will be viewed by your home country as one of its citizens and thus their services apply.

However, this does not mean that you can give up your obligations. In many instances, you might be required to pay taxes in both countries where you have your citizenships as well as complete military service as per German law.

Based on U.S and German law, you can have a citizenship of both countries. This can happen only in the instances where the child is born to one American and one German parent. In this case, the child is not required to give up either nationality and can hold both.

However, if the child lives in the U.S, they might have the citizenship of Germany, but cannot take advantage of German services. The other way around applies as well. U.S and German dual nationals are not exempt from military service, and can be required to file taxes in both countries. In addition, they cannot enter the U.S with a German passport and the other way around. They must present the German passport to enter Germany and the U.S passport to enter the U.S.

In another case, if an American citizen applies for naturalization in Germany, the American will have to give up their U.S citizenship to obtain the German one.

As is the case with dual citizenship for U.S and Germany, the same applies to Germany and the U.K. Children born with one parent from the U.K and one from Germany have the right to retain both citizenships.

With the exit of the U.K from the EU though, the matters have become more complicated for those working and living in Germany with a UK citizenship. Germany allows dual citizenships for EU nationals, but now that the U.K will not be in the EU due to Brexit, what will happen is still unclear.

Giving up the German Citizenship

If you have renounced your German citizenship in the past or have lost it for reasons other than criminal activity, you can apply for renaturalization. The procedure will be the same as with those who apply for naturalization the first time, and you will have to give up all previous citizenships.


Related articles:
German Nationality Law
How to Get German Citizenship
How to Move to Germany
How to Get a Work Permit for Germany