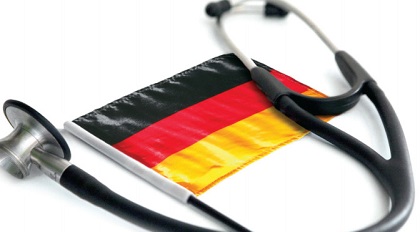 Germany’s principal health care providers are its physicians, dentists, and three types of hospitals (public, private nonprofit, and private for-profit). The health industry also includes large pharmaceutical companies and the manufacturers of various kinds of medical supplies. Public health departments, which are operated by the Länder, are not an important part of German health care. The public health clinics in the new Länder are being phased out during the integration of the two medical systems.

Germany’s supply of physicians is high. Students who meet academic requirements have a constitutionally guaranteed right to study medicine. This fact, plus an excellent and inexpensive university system, has resulted in the country’s educating physicians at a much higher per capita rate than the United States. Between 1970 and 1990, the number of physicians in the former West Germany more than doubled, and in 1991 the country had 3.2 physicians per 1,000 population, a higher ratio than most other members of the Organization for Economic Co-operation and Development. (In 1990 the United States rate was 2.3 per 1,000.) With 11.5 physician visits per person per year in 1988, West Germans and Italians went to a doctor more frequently than other Europeans. (In 1989 the United States rate was 5.3 visits per person per year.) Even so, expenditures to physicians per capita amounted to less than half (US$193) of those in the United States (US$414).

German physicians have good incomes (dentists earn even more), although their average earnings have declined from six to three times the average wage since efforts at cost containment began in the 1970s. The high number of physicians could reduce physicians’ earnings still further. In addition, many young physicians face unemployment. The GSG of 1993, for example, mandates a reduction in the number of office-based physicians who treat GKV patients (generally about 90 percent of physicians join the association that allows them this practice). The law also has the long-term goal of limiting the number of specialists in geographic areas where they are overrepresented.

The GRG aimed at encouraging a better integration of office and hospital care, but little progress was made. The GSG of 1993 intended to lessen the traditional division by, among other reforms, making it possible for hospital-based physicians to see their patients after their release from the hospital. It is expected that lessening the separation of the types of medical care will reduce overall health care costs, but as of mid-1995 no marked successes in achieving this goal had been noticed. Additionally, new budgeting rules that go into effect in 1996 may cause outpatient surgery, still unusual in Germany, to become more common by making it more profitable for hospitals.

The ownership of hospitals (there were a total of about 3,100 hospitals in the early 1990s) is the outcome of historical development and regional traditions rather than conscious policy and has resulted in three types of hospitals: public, nonprofit, and private for-profit. Each type accounts for about one-third of the hospitals. Public-sector hospitals are mostly owned by the Länder, municipalities, and counties and provide about 50 percent of all hospital beds. Nonprofit hospitals, typically run by Catholic or Protestant organizations, provide about 35 percent of the beds, and for-profit hospitals account for 15 percent.


Germany has too many hospital resources. In 1988 the ratio of 10.9 patient beds per 1,000 population in the former West Germany was higher than the OECD average. The number of admissions as a percentage of the total German population was 21.5 percent, significantly above the OECD average of 16.1 percent. The average length of stay of 16.6 days was below the OECD average but quite high by United States standards. Germany’s inpatient occupancy rate was 86.5 percent, also fairly high by international standards.

The average length of hospital stay in Germany has decreased in recent years from 14 days to 9 days, still considerably longer than average stays in the United States (5 to 6 days). Part of the difference is that the chief consideration for hospital reimbursement is the number of hospital days as opposed to procedures or diagnosis. Drug costs have increased substantially, rising nearly 60% from 1991 through 2005. Despite attempts to contain costs, overall health care expenditures rose to 10.7% of GDP in 2005, comparable to other western European nations, but substantially less than that spent in the U.S. (nearly 16% of GDP)

Between 1972 and 1986, the federal government and the Länder were jointly responsible for hospital policy making, but in 1986 the Land governments once again assumed sole responsibility. Länder own and partially finance medical school hospitals and accredited teaching hospitals. They enforce accreditation and licensing of health facilities and of health professionals working in social services. The Länder are responsible for policy development and implementation of social and nursing services, social assistance, youth services, and social work. Most important, the Länder remain responsible for the effective and efficient allocation and distribution of hospital resources.

According to the statistics  Germany has the highest number of dentists in Europe – 64,287 in 2015.


Related articles:
Healthcare in Germany
Development of the Health Care System in Germany