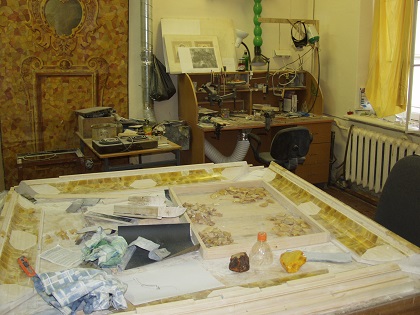 In the early 1980s, serious work on recreating the Amber Room based on old photographs and reminiscences was undertaken in the Catherine Palace, but the lack of funds threatened to put an end to the works. The process was left to the fate, but it seemed to be merciful to the Amber Room’s re-creators. Ruhrgas AG, Essen, Germany, made it possible to reconstruct the legendary Amber Room. As exclusive sponsor, the gas company is provided funds for the continuation of the reconstruction work, and the completion is scheduled for 2003.

Ruhrgas had learned about the project through the newspapers and approached the Tsarskoe Selo Museum about it. During the ceremonies, the Russian Minister of Culture, Vladimir Yegorov, emphasized that “Ruhrgas’s initiative sends a positive signal for German-Russian relations because the Amber Room is both a legend and a symbol of the huge loss of art treasures suffered by Russia during the war.

History works wonders: the Germans built the Amber Room, gave it to Russia as a gift, eventually took it, and the circle now comes full with the Germans paying for the Amber Room’s reconstruction. The Amber Room history is symbolic of the ups and downs in the relationships between Germans and Russians, and let this history end with the up!