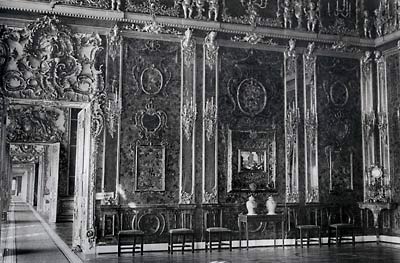 The history of the Amber Room dates back to the very beginning of the 18th century, when Andreas Schluter, the chief architect of the Prussian royal court, had the idea of using amber, a material never before used for interior decoration, to complete one of the rooms of the Great Royal Palace in Berlin during the reconstruction under Frederick I. The works started in 1701 and continued until 1713 with the help of the best German, Swedish, and Dutch amber masters, when the old king died, and the new Prussian King – Frederick Wilhelm I – came into power. He was not interested in the beautiful and exquisite Amber Room, the rumors of which have by that time reached Russia.

In 1716, Russian Tsar Peter I visited Berlin, admired the amber masterpiece, and Frederick Wilhelm I asked Peter the Great to accept the unusual room as a diplomatic gift. The Russian Tsar’s return present was no less original: 55 choice grenadiers. After a long shipping time and complex route (Berlin-Koenigsburg-Memel-Riga-St.Petersburg) the Amber Room finally reached its destination. The boxes were unpacked but the Russian masters did not manage to reconstruct the Amber Room, and it was for some time forgotten.

When Empress Elizabeth started reigning in the 1740s, she commissioned her chief architect, Bartolomeo Francesco Rastrelli, to use the amber for decoration of one of the rooms of the Winter Palace. The room was too large, and the architect used mirrored pilasters and painted additional panels in “fake amber”. In 1755, the Amber Room was transferred to the Catherine Palace in Tsarskoje Selo where the new room was to be constructed. The room in the Palace was again too large for the Amber Study, and the amber parts were reassembled on the walls alternating with pilasters and mirrors. The places where the amber was missing, were painted in “fake amber” and afterwards replaced with real amber panels. By 1770 the Amber Room was complete. However the amber was damaged by the stove heating and temperature changes, and the room was restored three times: in 1833, 1865, and in the 1890s. The next restoration was to take place in 1941. 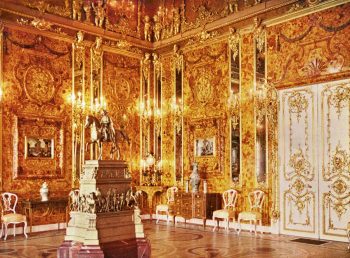 In the beginning of WWII it was decided not to evacuate the fragile Amber Room, and instead preserve the treasures on the walls of the Palace disguised by the paper, gauze and cotton. But is it possible to hide several tons of amber under the paper??? The German troops dismantled the panels and sent them to Koenigsburg, where the Room was displayed in one of the halls of the Koenigsburg Museum. In 1944, as the German Army retired, the Amber Room was dismantled again, and taken into the unknown direction. According to different resources, the Amber Room was:
– destroyed by the Allies’ bombing,
– buried in a silver mine not far from Berlin,
– hidden on the shores of the Baltic Sea.

Nothing is found yet, though parts of the mosaics appeared in the 1990s in Germany. Thus, the 50-year-old mystery of Amber Room is still alive.