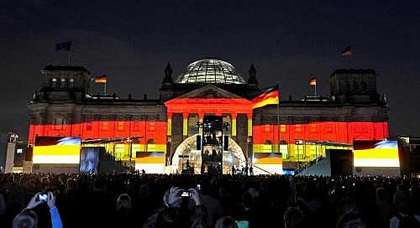 The East German and West German economies at the time of unification looked very similar. They both concentrated on industrial production, especially machine tools, chemicals, automobiles, and precision manufactures. Both had a well-trained labor force and an important export component, although their exports went largely in opposite directions. But the East German economy was highly centralized and guided by a detailed and purportedly precise planning system, with virtually no private property and with no room for decision or initiative.

On July 1, 1990, the economies of the two Germanys became one. It was the first time in history that a capitalist and a socialist economy had suddenly become one, and there were no precise guidelines on how it could be done. Instead, there were a number of problems, of which the most severe were the comparatively poor productivity of the former East German economy and its links to the collapsing socialist economies of the Soviet Union and Eastern Europe.

Even before economic unification, the West German government had decided that one of its first tasks was to privatize the East German economy. For this reason, it had taken over in June the Treuhandanstalt (Trust Agency, commonly known as Treuhand), which had been established by the GDR to take over East German firms and to turn them over to new management through privatization. The agency assumed the assets and liabilities of about 8,000 East German enterprises in order to sell them to German and other bidders. By the time the Treuhand was disbanded at the end of 1994, it had privatized some 14,000 enterprises.

As economic unification proceeded, issues that had been recognized but inadequately understood in advance began to surface. There was massive confusion about property rights. As wave after wave of Nazi, Soviet, and later GDR expropriations had taken place between 1933 and 1989, there was often little knowledge of the actual ownership of property. More than 2 million claims on properties in the territory of the former GDR were filed by the December 31, 1992, deadline. As more claimants emerged, with many winning cases in the courts, potential investors were often scared off.

Another problem was that East German production costs had been very high. The conversion rates of East German marks to deutsche marks often kept those costs high, as did the early wage negotiations, which resulted in wages far above the productivity level. Western German firms found it easier and cheaper to serve their new eastern German markets by expanding production in western facilities.

A third problem was that the inadequate infrastructure also became a problem for many potential investors. Telephone service was improved only very slowly. Many investors also complained about energy shortages, as many East German power stations were shut down for safety and other reasons. Roads and railroads had to be virtually rebuilt because they had been so badly maintained.

In addition to these practical problems, there was also a deep policy dilemma that underlay the entire process of unification. From the beginning, there had been a pernicious link between the earlier and later phases of the East German transition to a free-market economy. Policies calculated to make the initial adjustment as painless as possible hampered long-run growth and prosperity. Real economic efficiency could only be achieved by permitting and even forcing considerable immediate dislocations, whereas temporary compromises might lead to permanent structural burdens. However, excessive disruptions could jeopardize the economic and political stability required for a smooth unification process and might also cause streams of East Germans to move west. The government was never able to solve this dilemma. When it was forced to choose, it usually selected the more expensive and slower course to encourage persons to stay in the east.

Despite these problems, the process of unification moved ahead, albeit slowly. The Treuhand, staffed almost entirely by Germans from the west, became the virtual government of eastern Germany. In the course of privatization, the agency decided which companies would live and which would die, which communities would thrive and which would shrivel, and which eastern Laender would be prosperous and which would not. It also decided who might or might not buy eastern firms or services.

Whether correct or not, reports persisted throughout the first years of unification that foreign enterprises were being screened more carefully and more skeptically than German firms even as they were being invited to invest. Less than 5 percent of all investment in eastern Germany was non-German, and most of that was from companies with subsidiaries in western Germany who were expanding them to the east. The Japanese did not invest, although they had earlier expressed some interest, and the offices Treuhand established in New York and Tokyo found few investors.

Because the process of unification was managed by persons from western Germany, new eastern firms were usually subsidiaries of western firms, and they followed the western ownership and management patterns. Bank participation became customary, especially because the large Frankfurt banks assumed the assets of the former East German State Bank, and most eastern firms thus owed money to those Frankfurt banks. The banks installed their representatives on the boards of the new firms and assumed some supervisory functions–either directly or through control by western firms with bank representation. The Treuhand had close contacts with western German banks. Many of its employees came from those banks and planned to return to their jobs at the banks.

Because of these circumstances, private investment and economic growth came to eastern Germany at a relatively slow rate. Little new equity capital flowed in. Investment during the early years of unification was only 1 percent of the all-German GDP, when much more was needed to jump-start the economy of eastern Germany. Much of the investment was for the purchase of eastern German companies, not yet for their rehabilitation. Many western German firms bought eastern firms on a standby basis, making sure they could produce in the east when the time came and paying enough wages to satisfy the Treuhand but not starting production. Many others, including Daimler-Benz, did not even meet the commitments that they had made when they had purchased the eastern German firms from the Treuhand. Thus, western German private investment was not strong enough to boost the eastern German economy.

As private funds lagged, and in part because those funds lagged, federal budget investments and expenditures began flowing into eastern Germany at a consistently high rate. Government funds were used essentially for two purposes: infrastructure investment projects (roads, bridges, railroads, and so on), and income maintenance (unemployment compensation, social security, and other social costs). The infrastructure projects sustained employment levels, and the income maintenance programs sustained income. But neither had an early growth payoff.

Although the precise level of German official expenditures in eastern Germany has been difficult to estimate because funds appropriated in one year might have been spent in another, it is beyond dispute that the federal government expended well over DM350 billion in eastern Germany during the first three years after economic, or monetary, unification. After 1992 this requirement has continued at an annual level of around DM150 billion, so that the sum of private and public funds put into eastern Germany during the half-decade between monetary unification in 1990 and the end of 1995 would probably amount to at least DM750 billion and perhaps as much as DM850 billion. Between one-fifth and one-fourth of those funds were private, and the remainder were government funds. This constituted an infusion of outside money of about DM50,000 for every resident of eastern Germany, a far greater level of assistance than contemplated for any other area that had been behind the Iron Curtain and a token of German determination to bring eastern Germany to western levels as quickly as possible.

As eastern Germany went into a deep recession during the first phase of unification, the western German economy went into a small boom. Western German GDP grew at a rate of 4.6 percent for 1990, reflecting the new demand from eastern Germany. The highest growth rate came during the second half of 1990, but growth continued at only a slightly slower pace into early 1991. Prices, however, remained relatively stable because the cost of living grew at only 2.8 percent despite some high wage settlements in some industries. Employment rose during the year, from 28.0 million to 28.7 million, and the unemployment rate sank to 7.2 percent. Notably, the number of registered unemployed in western Germany only declined by about 300,000, showing that at least half of the new jobs in western Germany had been taken by persons who had moved to or were commuting from eastern Germany.


The dramatic improvement in the western German figures resulted from the opening in eastern Germany of a large new market of 16 million persons and the simultaneous availability of many new workers from eastern Germany. Many easterners did not want the shoddy goods produced at home, preferring western consumer products and food. Moreover, many easterners were coming to the west to work. By the end of 1990, as many as 250,000 were commuting to work in the west, and that number was estimated to have grown to 350,000 or even 400,000 by the middle of 1991.

This meant that western Germany not only had a vast new market but also a growth of over 1 percent in its workforce, as sharp an increase as since the days of the economic miracle. It also increased its capital base because eastern German deposits were placed in western German banks that had come east and because those deposits moved back to the central German financial market at Frankfurt.

The Bundesbank became worried about three elements of the sudden boom: the sudden financial shifts between east and west, which led to a jump in money supply; government deficits resulting from large expenditures in eastern Germany; and the potentially inflationary effects of a rapid growth rate in the west. The bank warned that interest rates would have to remain high to keep price increases under control. The bank raised short-term interest rates sharply through 1991 and 1992, with the average rate of short-term interest climbing from 7.1 percent in 1989 to 8.5 percent in 1990, to 9.2 percent in 1991, and to 9.5 percent in 1992. The Bundesbank permitted rates to begin falling only in 1993–to 7.3 percent–when it believed that the inflationary pressures had been contained by the recessionary effects of the credit squeeze.

As the Bundesbank’s policies began to take hold, growth slowed in western Germany, from 4.2 percent in the first quarter of 1991 to 0.8 percent in the last quarter of 1992. For all of 1992, the western German growth rate was 1.5 percent, a decline from the 3.7 percent rate of 1991 and even more from the 4.6 percent rate of 1990. The eastern German growth rate was 6.1 percent during 1992, well below the 7 percent to 10 percent growth rate originally anticipated for the region. The number of employed in western Germany fell for the first time in ten years, by 89,000 persons.

The 1992 depression continued into 1993, so that the economy actually registered a negative growth rate of -1.2 percent. By 1994, however, after the Bundesbank had been lowering short-term interest rates for over a year, German growth resumed at an annual rate of about 2.4 percent, but unemployment declined only very slowly despite the uptrend in GDP growth. It was expected that stronger growth would begin reducing the numbers of unemployed by 1995 and that Germany would return to its postwar path toward prosperity. But the absorption of eastern Germany, and the methods by which it had been accomplished, had exacted a high price throughout all of Germany.

Related articles:
The Fall of the Wall and Reunification
Ten Years Together: Bored or Happy?