Post-War life for German women was harsh. Trümmerfrau (literally translated as ruins woman or rubble woman) is the German-language name for women who, in the aftermath of World War II, helped clear and reconstruct the bombed cities of Germany and Austria. With hundreds of cities having suffered significant bombing and firestorm damage through aerial attacks (and in some cases, ground fighting), and with many men dead or prisoners of war, this monumental task fell to a large degree on women, creating the term. 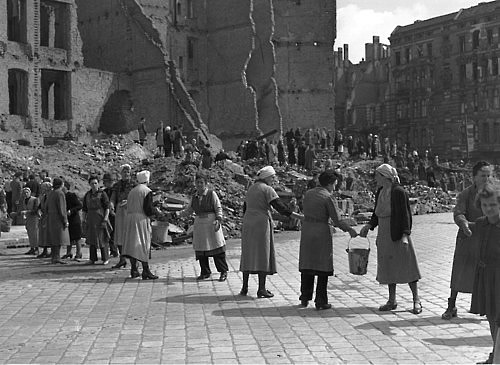 9th July 1945: Women in post-war Berlin, East Germany, form a ‘chain gang’ to pass pails of rubble to a rubble dump, to clear bombed areas in the Russian sector of the city.

Four million out of the sixteen million homes in Germany were destroyed during Allied bombings in World War II, with another four million damaged. Between 1945 and 1946, the Allied powers, in both West Germany and East Germany, ordered all women between 15 and 50 years of age to participate in the postwar cleanup. Trümmerfrauen, both volunteers and regular workers, worked in all weather. Their role was also considered important in changing post-war gender roles, though the concept of women as independent workers was taken up more eagerly in the official views of East Germany than in West Germany, where, once peace and economic prosperity was restored, a tendency reemerged in some parts of society to return women to their traditional family role only.

The fall of the Nazi government resulted in the establishment of the FDR and GDR in 1949. Post-war Germanys offered many more opportunities and provisions for German women. In West Germany, for example, it was written in the Basic Law of 1949 that women were equal in status to men. They were given the right to possess property upon the divorce or death of their spouse.

In the GDR (German Democratic Republic), women were given many opportunities – from the right of employment to a certain abortion policy. The rights and privileges granted to German women after World War II were, however, not implemented very well. Laws were written, but they were not practiced in everyday life. More importantly, many of the perceived privileges given to women were often made out of necessity and did not improve the lives of the women.

The German reunification process has not been just one of political and economic unification, but also has involved the merging of two very different societies. One similarity between the two countries was the fact that the social and political environments of both were male-dominated. Even so, the FRG and the former GDR differed significantly with respect to the roles that women played in the professional world and at home.

When the GDR became five new Länder (states) in the FRG, many old East German laws and culture were rejected; and the GDR was expected to conform to West German standards concerning law and culture. Because of political doctrine, approximately 90 percent of women in the GDR were in the labor force. They benefited from such provisions as a comprehensive child care program, abortion rights and extensive job training. Many of these benefits were lost in the reunification process. In contrast, women in the FRG had a much lower labor force participation rate, lacked adequate child care, had extremely limited abortion rights and had much less access to job training than women in the former GDR.

Currently, women in the recently reunified Germany are striving to obtain true equality. The main efforts at this time are being directed towards equality in the workplace, which is still dominated by men in the higher levels of management, and also towards equal pay for similar work.