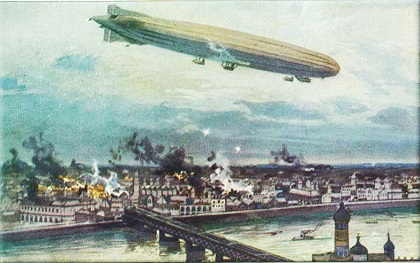 Zeppelins became the frightful reality of WWI. The huge ships carried and dropped the bombs on France and Britain, and there was no defense against the midnight raids of the monsters. The cruising speed of the zeppelins was comparable to the airplanes of the enemies, and the great area allowed lots of guns bristling out of an airship, so it was not easy for the pilots to catch up with the airships and destroy them.

It was not until the end of the war that the zeppelins became less monstrous and more vulnerable. New planes with more powerful engines were built to be able to catch up with the zeppelins. These new planes also carried a new weapon hitting the weak point of the airships: their highly flammable lifting gas. Bullets laced with phosphorus burned with a hot flame setting the massive volume of hydrogen aflame. When a zeppelin burned, the witnesses said that it would light the night sky.

In return, the Germans made new zeppelins – high-flying, super light weight ships with the underside painted black so that they couldn’t be spotted at night. The idea of “Height Climbers” didn’t last long, because the time of zeppelins as a military weapon was coming to an end.

The Treaty of Versailles in 1918 ending WWI forbade German companies to build airships and planes. It was a crushing blow for Friedrichshafen. However the production went on, now concentrating on the development of powerful high-speed diesel-engines for railways as well as for ships and cars. The airships that were left were delivered within the scope of reparation payments to the victors of WWI. The USA had allowed the construction of LZ 126 as a reparation airship. It was built in 1923. As the Allies canceled the prohibition for airship building in 1926, the construction of LZ 127 – the most successful airship – was begun. In 1935 LZ 129 – called “Hindenburg” – was built, and nobody expected the disastrous end waiting for her in 1936.