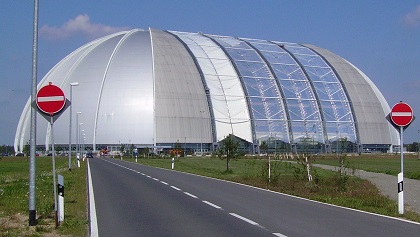 Transportation Means of the Future
… comes from the past!

Not far south of Berlin one can see a fantastic-movie picture: a giant building is standing and sparkling in the sun. This is a hangar where CargoLifter AG produces dirigibles, majestic airships that came into life as Zeppelins, named after their inventor, Graf Ferdinand von Zeppelin.

The dimensions let us get the idea of how really huge the hangar is. It is 360 m long, 210 m wide, 107 m tall, and contains 5.5 million cubic meters of air. The picture of the full-size hangar can be taken at the distance of no less than one kilometer away from it.

The company has already built three airships – Joey, Charly, and CL 75 AirCrane. Unlike their hydrogen-filled predecessors, these airships are filled with the non-flammable gas helium, which makes this “lighter-than-air” transport safe. The target of CargoLifter is CL 160 which will be able to carry loads with a volume of 3200 cubic meters (50m x 8m x 8m) and weighing up to 160 tons, over a maximum distance of 10000 kilometers. CL 160 belongs to semi-rigid airships, also known as keeled airships.

The envelope is not stretched over the rigid structure (as it was with the Zeppelins) and maintains its shape through its internal pressure. However, the aluminum keel is attached to the bottom of the envelope, which takes on freight and distributes the weight of the payload along the entire length of the envelope. Engines, fuel tanks, flight deck and crew cabin are integrated in the keel. 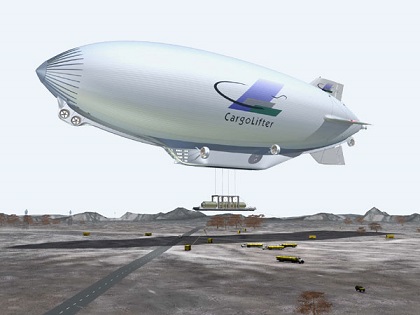 When it is finished, CL 160 will be 260 m long, 65 m in diameter, 550000 cubic meters in volume, and will be able to fly at the speed of 90 km/h. The key advantage of an airship in the CargoLifter transport system will be its ability to operate as a flying crane without landing. The CL 160 will be able to exchange its cargo from an altitude of about 100 m with the help of specially developed load exchange process.

Thus, CargoLifter is not only an airship project, but rather a logistical innovation. Market studies have shown that the future belongs to airship transportation. It will be especially efficient for transporting large components that usually need to be disassembled and then reassembled after transportation which is very time-consuming and costly. Airships are also super effective in transporting loads to out-of-the-way regions where ground and sea transportation is impossible. CargoLifter will also be active in the humanitarian aid sector.

Related articles:
The Death of the Hindenburg
Zeppelin Airships
Zeppelins the Bombers