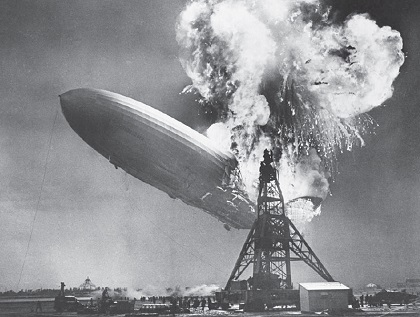 Hindenburg was a masterpiece of zeppelin design. Equipped with four 1200 hp Mercedes Benz engines, having 245 m in length, about 41 m in diameter and almost 212000 cubic meters of gas volume, she still holds the record of the largest airship ever built and flying. She can be truly called the Titanic of the aircraft.

Although the Hindenburg is most famous for her fiery death, she was not initially meant to be filled with hydrogen at all. Dr. Hugo Eckner, at that time the chairman of the Zeppelin company, had decided that it would be wiser to fill his new ship with the nonflammable gas helium. However the dream was not to come true. Here goes the explanation.

In order to remain afloat, the Zeppelin Company had to accept large sums of money from the government led at that time by the Nazi Party and Adolf Hitler. The Hindenburg and the Graf Zeppelin – the two most majestic airships – carried the swastika signs on their tail fins and participated in many propaganda shows, flying all over Germany and dropping leaflets and pamphlets illustrating the power of the Nazi.

The United States, having the only natural deposits of helium in the world, were getting more and more suspicious of Hitler and his Third Reich. They wondered if the zeppelin could be used for military purposes such as they were in WWI. Although the head of the Zeppelin Company never belonged to the Nazi movement and criticized it, the U.S. Congress came to the decision that it was impossible to let the Germans have helium for their new airship. Thus, the Hindenburg was filled with hydrogen. Now that the grand ship was fully ready to fly, it took off to the sky on March 4, 1936. The tests went well, and the Hindenburg was scheduled to start carrying passengers across Europe and North and South America.

The LZ129 (the Hindenburg) contained many novelties and was a luxurious airship. For example, she carried the passengers inside her huge hull instead of the gondola section, as it was done before. She was also equipped with a room for smokers, which was astonishing for an airship inflated with hydrogen. However everything was foreseen: the room was lined with asbestos and built with an airlock which would keep any flames from spreading to the rest of the ship. All lighters and matches were removed from the passengers and kept under lock and key until the end of the flight, and there was the only lighter fixed on a table in the smokers’ room.

The mighty Hindenburg was not a longliver of a zeppelin. She made only a few breathtaking flights before her destruction. … It was her first flight from Frankfurt, Germany to Lakehurst, New Jersey. The airship left Germany on May 3, 1937, and reached the destination on May 6. There were 96 people on board – 36 passengers and 61 crew-men. It was an impressive and thrilling sight – an enormous zeppelin floating smoothly across the sky. A numerous audience was watching the airship at Lakehurst. Suddenly a tongue of flame embraced the tail and spread with a horrifying speed all over the zeppelin, turning it into a fire ball. In less than a minute the giant creature crashed onto the ground. She took the lives of 36 people – 13 passengers, 22 crew-men, and 1 civilian member of the ground crew. Nobody knows why it happened. There are many versions: a) sabotage; b) stroke of lightning; c) carefully planned insurance fraud. Nobody can tell for sure, but at that time two things were clear – that German engineers are not that impeccable as they were thought of before the tragedy, and that commercial airships do not have future.

Nowadays, a century after the first zeppelin’s flight, the German giants are getting revived.