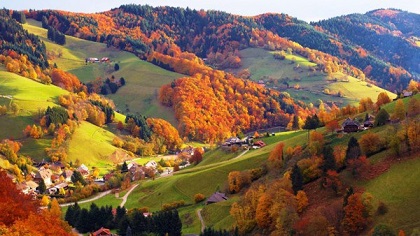 Although located mostly at latitudes north of the United States-Canadian border and thus closer to the Arctic Circle than to the equator, Germany’s climate is moderate and is generally without sustained periods of cold or heat. Northwestern and coastal Germany have a maritime climate caused by warm westerly winds from the North Sea; the climate is characterized by warm summers and mild cloudy winters. Farther inland, the climate is continental, marked by greater diurnal and seasonal variations in temperature, with warmer summers and colder winters.

In addition to the maritime and continental climates that predominate over most of the country, the Alpine regions in the extreme south and, to a lesser degree, some areas of the Central German Uplands have a so-called mountain climate. This climate is characterized by lower temperatures because of higher altitudes and greater precipitation caused by air becoming moisture-laden as it lifts over higher terrain.

The major air masses contributing to the maritime weather are the Icelandic low-pressure system and the Azores high-pressure system. The Icelandic lows rotate in a counterclockwise direction and tend to move to the east and southeast as they approach Europe. The Azores highs move eastward and rotate in a clockwise direction. Both of these air masses furnish Western Europe with moisture-laden clouds propelled by westerly winds.

The northern lowlands frequently experience a situation (more often during the winter months) when they are between these air masses and are simultaneously influenced by both. At such times, winds come from the west and are usually strong. When only one of the systems is dominant, it is more often the Icelandic low. In spite of their nearly polar origin, Icelandic lows are warmed by the Gulf Stream, and areas on the country’s North Sea coast have midwinter temperatures averaging more than
1.6° C. This temperature is more than three degrees above the average for the latitude, which is shared by central Labrador and some bitterly cold regions in Siberia.

When continental weather systems originating to the east are responsible for the weather, conditions are markedly different. In the winter months, these systems have high-pressure air masses that bring bright, clear, cold weather. The local people describe these air masses as Siberian highs and usually expect them to last for about two weeks. An occasional condition called föhn, or warm wind, arises when the center of a low-pressure system deviates to the south of its usual path and crosses the central part of the country. In this atmospheric condition, warm tropical air is drawn across the Alps and loses moisture on the southern slopes of the mountains. The air warms significantly as it compresses during its descent from the northern slopes. In the springtime, these winds dissipate the cloud cover and melt the snows. Many people respond to the rapid weather changes caused by the föhn with headaches, irritability, and circulatory problems.

The yearly mean temperature for the country is about 9° C. Other than for variations caused by shelter and elevation, the annual mean temperature is fairly constant throughout the country. Temperature extremes between night and day and summer and winter are considerably less in the north than in the south.