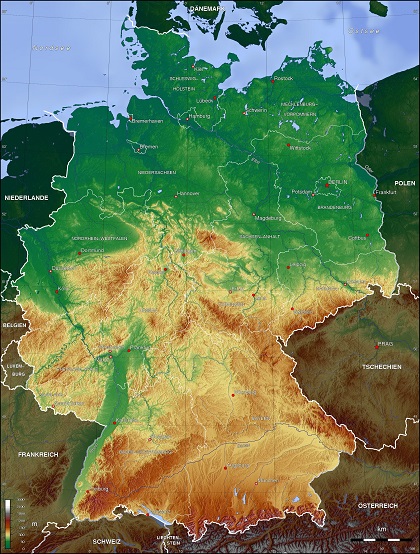 Germany is located in the Central Europe, bordering the Baltic Sea and the North Sea, between the Netherlands and Poland, south of Denmark. Roughly the size of Montana and situated even farther north, unified Germany has an area of 356,959 square kilometers. Extending 853 kilometers from its northern border with Denmark to the Alps in the south, it is the sixth largest country in Europe. At its widest, Germany measures approximately 650 kilometers from the Belgian-German border in the west to the Polish frontier in the east.

The territory of the former East Germany (divided into five new Länder in 1990) accounts for almost one-third of united Germany’s territory and one-fifth of its population. After a close vote, in 1993 the Bundestag, the lower house of Germany’s parliament, voted to transfer the capital from Bonn in the west to Berlin, a city-state in the east surrounded by the Land of Brandenburg.

Topography: With its irregular, elongated shape, Germany provides an excellent example of a recurring sequence of landforms found the world over. A plain dotted with lakes, moors, marshes, and heaths retreats from the sea and reaches inland, where it becomes a landscape of hills crisscrossed by streams, rivers, and valleys. These hills lead upward, gradually forming high plateaus and woodlands and eventually climaxing in spectacular mountain ranges.

As of the mid-1990s, about 37 percent of the country’s area was arable; 17 percent consisted of meadows and pastures; 30 percent was forests and woodlands; and 16 percent was devoted to other uses. Geographers often divide Germany into four distinct topographic regions: the North German Lowland; the Central German Uplands; Southern Germany; and the Alpine Foreland and the Alps.

Population, Area, and Capitals of the Länder