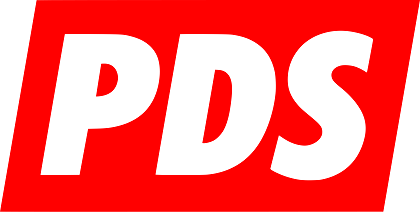 The communist party that ran East Germany was the Socialist Unity Party of Germany (Sozialistische Einheitspartei Deutschlands–SED). Founded in 1946, the SED controlled the government and the electoral process and supervised the omnipresent State Security Service (Staatssicherheitsdienst–Stasi). To be considered for important positions in East German government and society, membership in the party was a requirement.

When the East German public toppled the communist regime, the SED and its extensive organizational structure also came unraveled. Membership fell dramatically; local and regional party groups disbanded. In a desperate attempt to save itself, the SED sought to reconstruct itself for the new democratic climate. It changed its name in February 1990 to the Party of Democratic Socialism (Partei des Demokratischen Sozialismus–PDS). The old party guard was replaced by moderate leaders, such as the new chairman, Gregor Gysi. The PDS won 11 percent of the vote in eastern Germany in the 1990 all-Germany election, an outcome that entitled the party to seventeen seats in the Bundestag. In the Bundestag, the PDS has advocated communist values and has energetically criticized the Kohl government. The PDS’s all-Germany tally reached only 2.4 percent because of a showing in western Germany of 0.3 percent.

The party’s electoral base is limited to the east, particularly areas in which substantial numbers of former SED members live. In mid-1995 the PDS had roughly 130,000 members in the east, giving the PDS the largest membership of any party in eastern Germany. The party’s strongholds are Saxony, Berlin, and Brandenburg. The party continues to have a tiny following in the west, with 1,200 members.

Two main factors account for the success of the PDS in the east: the PDS inherited the infrastructure and local grassroots organization of the SED, and the PDS has come to be seen by many in the east as the only party that represents specifically eastern German interests and that stresses the positive aspects of eastern German life. Over 90 percent of PDS members belonged to the SED, and 66 percent are over the age of sixty. The established parties have largely ostracized the PDS.

The PDS garnered 4.4 percent of the vote in the 1994 national election, an outcome that, as predicted, left the party beneath the 5 percent hurdle. However, the party won parliamentary representation, thanks to a peculariarity of the German electoral law: the fact that the PDS won four districts outright (all in eastern Berlin) entitled it to thirty seats in the Bundestag. Much credit for the strong showing of the PDS in the east has been given to the party’s leading figure, the lawyer Gysi, an articulate and charismatic member of parliament.