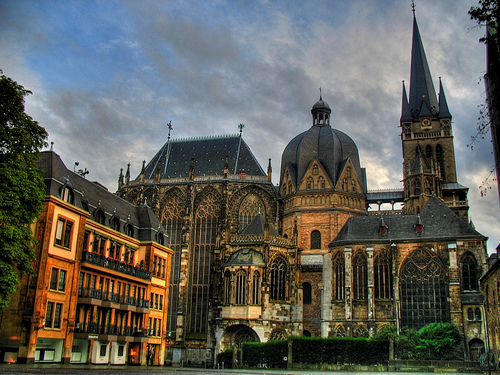 Aachen Cathedral was included into UNESCO World Heritage List in 1978 and got one of the top sites of the list due its unique history enriched by legends and myths and luxurious treasures kept in the cathedral.
Construction of this palatine chapel, with its octagonal basilica and cupola, began c. 790–800 under the Emperor Charlemagne. Originally inspired by the churches of the Eastern part of the Holy Roman Empire, it was splendidly enlarged in the Middle Ages. The construction of the chapel of the Emperor at Aachen symbolized the unification of the west and its spiritual and political revival under the aegis of Charlemagne. In 814, Charlemagne was buried here, and throughout the Middle Ages until 1531 the Germanic emperors continued to be crowned here. The collection of the treasury of the cathedral is of incalculable archaeological, aesthetic, and historic interest.

The special value of this church was given by its author, the legendary Emperor Charlemagne. It is said that Charlemagne was born in Aachen, the German Western boundary town (the town borders Belgium and Netherlands ), and created the central Northern Europe cultural and politic headquarter at his native place. Besides Charlemagne’s outstanding political activity and lively deeds directed to Christianity religion and Roman culture development he was credited by erection of one of the largest and most significant construction of the Middle Ages – Aachen Cathedral.

The Cathedral itself got several names: the Palatinate Cathedral, St. Mary’s Church and the Minster. The Charlemagne’s activity bore the two main reasons of the modern vivid interest and care to this church – first, he created the royal residence palace at the Cathedral and was also buried there according to his will; second, he managed to develop the unique collection of the Christian relics and gathered and kept all of them in the Cathedral.

The first aim – to establish royal residence – coincided with the second inner willingness to create one of the most majestic and influential edifice of Christianity. The Dome mixed up the elements of different architectural styles: Gothic, Byzantine, Classical and art of Carolingian period. This mixture is inevitable consequence of numerous completions during later centuries provided by the next great German Emperors such as Otto III and Frederick Barbarossa. All of these historical figures enriched the German history with great deeds and were crowned and buried in Cathedral.
The Cathedral was built in the form of octagon with the choir and chapels. The octagon takes the core position and has the golden mosaics pictures with the God and twenty four Ancients around Him. It interior is also decorated by fascinating statues and Charlemagne’s grave. During the Gothic period the altar and the stone in the memory of the Emperor Otto III were added. 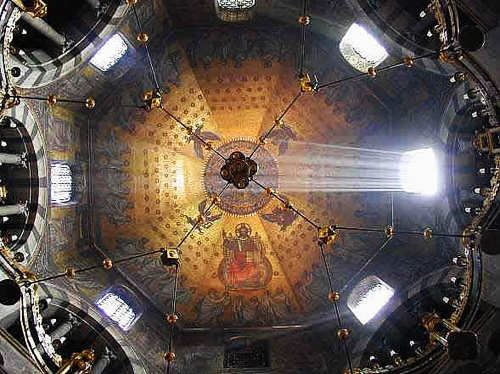 The unique Christian relics’ collection is the core of pilgrimages from all over the world. This collection comprises four Great Relics: the shroud of the Blessed Virgin, the God’s loin-cloth, the Jesus’ swaddling band and the cloth for St. John’s head.