Germany’s economic growth during the first decades after the war at times overshadowed its marked success at joining the international community. In 1945 the country’s economy was shattered. A good part of what survived was later dismantled and carried off by the victorious Allies. Within Germany there was much argument about how to rebuild the economy and what its nature should be. Socialist politicians argued for a central distribution system, extensive state controls, and the nationalization of banks and industry. Their main opponent was Ludwig Erhard, a liberal economist appointed to head the office of economic affairs in the Bizone, who later became minister for economics and ultimately FRG chancellor (1963-66), succeeding Adenauer. 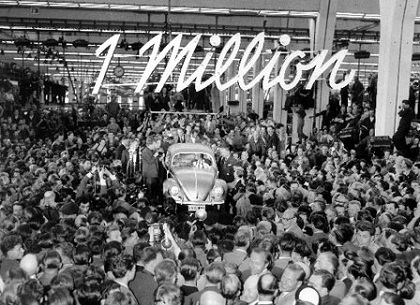 Erhard’s concept of a socially responsive market economy based on free trade and private enterprise, aided by the infusion of capital through the Marshall Plan, proved to be the ideal basis for the strong recovery of the West German economy, culminating in the economic miracle (Wirtschaftswunder) of the 1950s. In some areas, for instance in housing and in agriculture, prevailing circumstances required the introduction of price controls and subsidies. Controls to prevent the formation of cartels and to foster monetary stability also remained the state’s responsibility. The state likewise furthered the accumulation of private capital and protected ordinary citizens by establishing a generous system of social services that included statutory health, unemployment, and pension insurance programs.

West Germany’s economy functioned very well for several decades, and the country became one of the world’s wealthiest. Thanks to the strong social welfare component and the system of codetermination, which gave workers in factories some say about their management, West German industry enjoyed a long period of labor peace. The export-oriented economy received another boost with the creation of the European Economic Community by the Treaty of Rome in March 1957. West Germany was one of the EEC’s founding members.


Related articles:
West Germany and the Community of Nations
Rearmament and the European Defense Community
Ludwig Erhard and the Grand Coalition