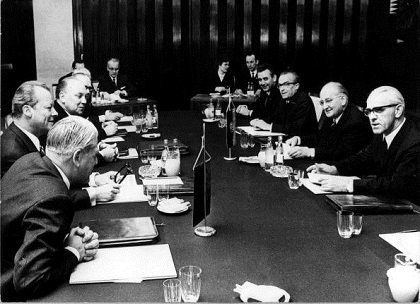 Although Honecker pursued a tough policy against internal dissidents and carefully guarded the GDR’s unique identity as the state in which the old Marxist dream of socialism had become a reality, he was keenly aware of the necessity for communication and reasonable working relations with the FRG. His dream of being received at the White House as a guest of state by United States president Ronald Reagan was never realized, but Honecker opened more lines of communication to Western politicians than had his predecessors.

As a consequence of the Helsinki Accords, the reception of Western news media broadcasts was tacitly allowed in the GDR. In the early 1980s, it also became possible for citizens of the GDR who were not yet pensioners to visit relatives in the West in cases involving urgent family matters. Under a new regulation, refugees who had gone to the West before 1981 and had therefore automatically lost their GDR citizenship could now enter the GDR with their West German passport. These measures benefited East Germans and, together with access to Western television, helped to create a new relaxed atmosphere in the GDR.

On the economic side, the GDR fully utilized the advantages of the Interzone Trading Agreement, which allowed special consideration for the export of goods from the GDR to the FRG and other EC member states, as well as the import of vital industrial products from the West. Diplomatic relations with the EC were established in 1988, a reversal of the former policy that saw the organization as a threat to the GDR’s sovereignty. The annual Leipzig Industrial Fair also provided a convenient forum for meeting Western politicians and industrialists.

The severe shortage of Western currency in the GDR, one of the key concerns of the SED leadership, was alleviated by agreements with the FRG that tripled the bulk contributions to the East German postal administration by the FRG. Similar agreements, financially advantageous to the GDR, improved the highway links to West Berlin. More significant, however, was the granting of bank credits amounting to DM2 billion to the GDR during 1983 and 1984. The CSU leader and minister president of Bavaria, Franz Josef Strauss, was the principal negotiator of these credit agreements.

At first, the credits appeared to yield positive results along the inner-German border, where mines and automatic guns, which had so long posed a deadly threat to East Germans attempting to flee to the FRG, were dismantled. Later, however, it became clear that these devices had been replaced by nearly impenetrable electronic warning systems and with trained dogs at certain sectors along the border. The order to shoot at refugees was not rescinded but remained in effect almost until the end of the GDR regime. Also remaining in effect were strict controls for West German citizens at GDR border crossings and on transit routes to and from West Berlin, although there were no further reports of people being abused at border checkpoints.

However much relations improved between the two states in some areas, the stance of the SED leadership toward the FRG’s NATO membership remained hostile. Harsh attacks in the East German press labeling the FRG as an “American missile launcher” became more frequent during the debates on the stationing of Pershing II and cruise missiles. On occasion, high-level official visits were canceled to signal the GDR’s opposition to Western military policies. The FRG responded in kind. For example, Federal President Karl Carstens (1979-84) did not attend as planned the East German celebrations on the occasion of the 500th anniversary of the birth of Martin Luther in 1983.

In October 1987, when the two superpowers were striving for détente and disarmament and the relations between the two Germanys were cordial, Honecker visited Bonn as the GDR head of state. The visit, postponed several times, was in response to Chancellor Schmidt’s visit to East Germany in 1981. Honecker was in the West German capital for an “official working meeting.” He signed agreements for cooperation in the areas of science and technology, as well as environmental protection. Honecker’s statement that the border dividing the two Germanys would one day be seen as a line “connecting” the two states, similar to the border between the GDR and Poland, attracted thoughtful public attention in the West. Honecker was cordially received by members of the government, in the words of Federal President Richard von Weizsaecker (1984-94), as a “German among Germans.” However, at various stages of the visit–which subsequently took him to several federal states, including his native Saarland–large numbers of demonstrators chanted, “The wall must go.”

The East German media coverage of the visit provided the opportunity for Chancellor Kohl to speak to “all the people in Germany” and to call for the breaking down of barriers “in accordance with the wishes of the German people.” Although the visit yielded no immediate concrete results and Honecker’s hopes of increased political recognition for the GDR were not realized, a dialogue had begun that could make the division of Germany more bearable for the people involved. As of late 1987, however, there was still little hope of overcoming the division itself.

Related articles:
The Honecker Era, 1971-89
The Conference on Security and Cooperation in Europe
The New East German Constitution and the Question of Identity
The Peace Movement and Internal Resistance in GDR
The Last Days of East Germany