The building of the Wall effectively halted large-scale emigration from the GDR. Although the SED failed to gain the active support of the majority of the population, young people, especially, began to tolerate the regime, at least passively. In the absence of any alternatives, they fulfilled their routine duties in youth organizations, schools, and workplaces. By the mid-1960s, the regime could afford to lessen internal pressures on its citizens, who, encouraged by increased production of consumer goods, had largely given up their open resentment against the SED and had turned their attention to improving their standard of living.

Ulbricht’s state visit to Egypt in 1965 ended the GDR’s political isolation. A previously unknown pride in East German achievements and a feeling of distinct GDR identity began to develop, first among ruling party functionaries and then gradually among segments of the population. In 1967 the GDR leadership, encouraged by these developments, attempted to gain official recognition of its autonomy from the FRG. When the FRG refused to grant recognition, the GDR government proclaimed a separate GDR citizenship and introduced a visa requirement for West Germans traveling to West Berlin and to the GDR. With these measures, the GDR began to practice a policy of new assertiveness and ideological delimitation (Abgrenzung) in response to the FRG’s policy of recognizing only one German citizenship. 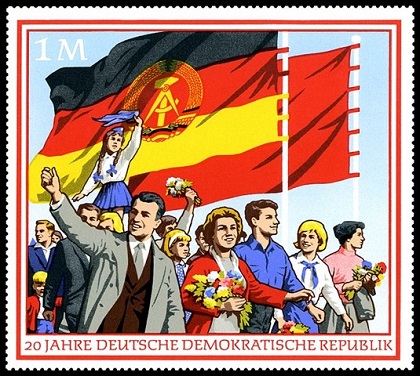 Membership in the UN was a primary foreign policy goal of the GDR in the late 1960s. A veto by the Western powers in the UN Security Council blocked the GDR’s bid, however. The GDR did gain admission to the International Olympic Committee, which permitted East German athletes to participate in the Olympic games as a separate team. For the GDR, however, the ultimate breakthrough in the area of foreign policy–a treaty with the FRG–came only after international political tensions began to ease under the new spirit of détente.

Following the conclusion of the Treaty of Moscow between the FRG and the Soviet Union in January 1970, a new era of communication began between the two German states that culminated in the signing of the Basic Treaty in December 1972. The next year, both states became members of the UN, and most countries came to recognize the GDR. Permanent diplomatic representations, in lieu of embassies, were established, respectively, by the FRG in East Berlin and by the GDR in Bonn, demonstrating the new climate of mutual respect and cooperation between the two German states.

In this new setting, there was no longer room for Walter Ulbricht, who had maintained a policy of confrontation with the West for many years. The Soviet Union, which had demonstrated considerably more flexibility than the GDR leadership during its negotiations with the FRG, was also irritated by the failure of Ulbricht’s economic program and by his attempts to demonstrate ideological independence by adhering to conservative Marxist principles. In 1971 the Soviet authorities ordered that Ulbricht be relieved of power. His replacement was Erich Honecker, who, as secretary of the Central Committee of the SED for security matters, had been directly responsible for the building of the Berlin Wall.

Related articles:
The Ulbricht Era, 1949-71
Consolidation of the New State
Planned Economy in GDR
The Warsaw Pact and the National People’s Army
The Berlin Wall